Summer is for Lovers by Jennifer McQuiston 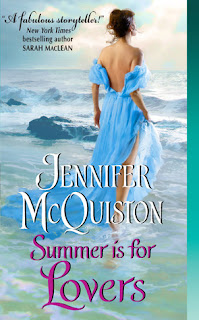 Here is what Goodreads says:

"His heart is unavailable.

Luckily, her interest lies in the rest of him…

Though she was just a girl when they first met, Caroline Tolbertson’s infatuation with David Cameron remains undimmed. Now fate has brought the handsome Scotsman back to Brighton for what promises to be an unforgettable summer. Soon, Caroline will have to choose a husband, but for now she is free to indulge her curiosity in things of a passionate nature.

That is, if David will agree to teach her.

Past mistakes have convinced David he’ll make a terrible husband, though he’ll gladly help the unconventional Caroline find a suitor. Unfortunately, she has something more scandalous in mind. As the contenders for her hand begin to line up, her future seems assured…provided David can do the honorable thing and let them have her.

(Formerly called Brighton is for Lovers)

When a spirited young woman is determined to break Society’s rules, all a gentleman can do is lend a hand…or more."

I like stories that move away from London and the ton.  Summer is For Lovers does just that.  It is set in Brighton and while the ton is involved they are visiting and life is not as structured.

Trope:  A man who feel he is unworthy of any one because of a past mistake.  A woman who must marry for money in order to help her family.

Plot:  Caroline met David years ago when she was 11.  Now she is older and feels that she must marry for money.  The only problem is the only one she wants is David and he says he will never marry.  There are twists and turns.   Some caused by two Mother’s who are busy interfering.  There were a lot of elements in the story that required me to suspend disbelief.

Characters:  I loved Caroline.  She is very independent  and does not even try to act as society thinks a women show behave.   David on the other hand is not as strong.  He knows what he wants but refuses to let go of the past.  There are some very good secondary characters who are essential to the story.

Writing:  The writing is very good.  I like the way everything moved and most of the story was introduced in dialog and action.

Avon will release Summer is For Lovers by Jennifer McQuiston September 24th,  2013.

There is still time for you to pre-order.

I received an eARC of Summer is For Lovers from Edelweiss.