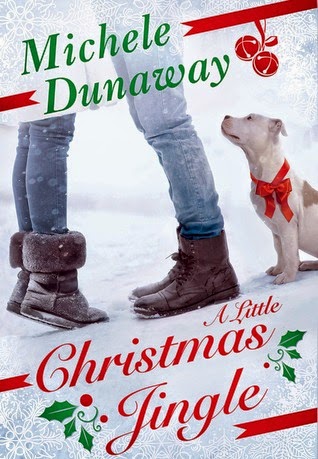 Kat Saunders needs a Christmas miracle. She’s expanded her vet practice to include a no-kill shelter, and she forgot to get the required permits. Now that a few neighbors have complained and she’s been summoned to court, she could lose everything she has worked for. When a gorgeous detective comes to her with an abused pit-bull, she does everything she can to save the puppy and soon realizes that brooding Jack Donovan might just be the answer to her legal woes. Jack, or Mr. December to fans of the Sexy Public Servants Charity Calendar, hates Christmas. As head of St. Louis’s first Animal Cruelty Task Force, Jack has seen the worst in people, especially around the holidays. But one sexy vet is getting under his skin with her tireless holiday cheer, intent on proving to him that there is Christmas magic in the air.

A Little Christmas Jingle adds another book to the feel good romances that come out around Christmas.  This one features a dog but in a very different way.  Jingle has been abused and is in danger of dying when Jack Donovan gets him to Kat Saunders vet practice.   This is not cute dog story; in fact it is just the opposite.  There is a very strong message about how much pet abuse there is in the world.

Dunaway does a great job of getting that message across without it getting in the way of the romance that is also at the heart of the story.  Both Kat and Jack are easy characters to like.  Both are devoted to their jobs and the jobs are what bring them together.  While they have that in common their views on Christmas are very different.  Kat loves it and Jack really hates it especially this year when he is Mr. December on a charity calendar.

One of the fun parts of the story occurs when Jack really messes up the relationship between he and Kat and has to prove he can get into the Christmas Spirit.  There are other problems as well but in the end Jack and Kat get to their HEA.

I received an ARC of A Little Christmas Jingle from Netgalley in return for a honest review.
Posted by JC Jones at 12:30 AM