What I read in September

You can find my book ratings on Goodreads

Never Love a Lawman by Jo Goodman
What I Did For Love by Susan Elizabeth Phillips
Blue-Eyed Devil by Lisa Kleypas
Knight of Desire by Margaret Mallory
The Lone Texan by Jodi Thomas
Tempt Me At Midnight by Lisa Kleypas
Posted by JC Jones at 6:03 AM No comments:

The Lone Texan by Jodi Thomas

Berkley Books published The Lone Texan by Jodi Thomas in 2009.
Posted by JC Jones at 6:49 AM No comments:

Tempt Me at Twilight by Lisa Kleypas 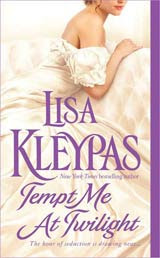 Tempt Me At Twilight is the latest book about the unique and unusual Hathaway family. Unlike the rest of her unconventional family Poppy Hathaway longs for a normal life but all of her plans fall apart when she meets Harry Rutledge. If you have been reading this series you will recognize his name. Harry Rutledge is mentioned in previous books as the reclusive owner of the Rutledge Hotel where the Hathaway’s stay when they are in London. Poppy meets Harry when her sister’s ferret Dodger steals a letter from Poppy’s current suitor. While chasing Dodger through the hotel Poppy stumbles into a secret passage that ends in Harry’s private trophy room. That one meeting changes both of their lives. Tempt Me At Twilight is a wonderful addition to the Hathaway saga. There are glimpses into the lives of all of the Hathaway’s as they deal with Harry and Poppy. It is great fun to meet old friends while setting the scene for the rest of the books in the series. Lisa Kleypas continues to write great stories that fulfill the desires of readers like me.

St. Martins Paperbacks published Tempt Me At Twilight by Lisa Kleypas in 2009.


While Tempt Me At Twilight is part of a series it can be read as a stand-alone.

Mine Till Midnight
Seduce Me at Sunrise
Posted by JC Jones at 6:42 PM No comments: 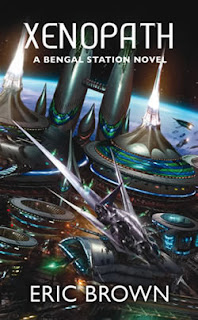 Warning: This contains a spoiler for Necropath, the first novel in the Bengal Station series.

Xenopath by Eric Brown is the second novel featuring Jeff Vaughn. In Necropath Jeff was a cynical and disillusioned telepath barely able to stand the burden caused by his telepathic implant. In spite of everything he succeeded in destroying a malevolent alien and in the process had the implant ripped out.

Xenopath finds Jeff two years later. He is a very different person. No longer a telepath he is married, expecting a child and happy. An unexpected job offer finds Jeff again dealing with an alien entity. This time his job is to help not destroy the alien. As a result Xenopath does not have the dark edgy tone that characterized Necropath. Xenopath is a hard to put down page-turner. There are characters from the first novel as well as some interesting new additions. The change in Jeff Vaughn makes him more likable and part of the tension comes from wanting things to go well in his new life. Even through events are threating his new life he does not back down from doing what is right. Eric Brown weaves all of these factors into a great story. If you like a well written engaging Science Fiction mystery pick up Xenopath.

Solaris published Xenopath by Eric Brown in 2009. Xenopath is available from Amazon.

Books in the Bengal Station series are:

Necropath
Xenopath
Cosmopath is due out in December of 2009
Posted by JC Jones at 6:57 AM No comments:

Coyote Horizon, A Novel of Interstellar Discovery by Allen Steele

Coyote Horizon is Allan Steele’s latest book about Coyote. Set after the Coyote trilogy, things are changing on Coyote and on Earth. Everyone is dealing with the discovery of other intelligent species. Earth is collapsing and wants to send as many people to Coyote as possible. The settlers on Coyote want controlled immigration. All of these factors lead to unexpected consequences. Many of the characters from the earlier books play a major role in Coyote Horizon. Fans of the series will not be disappointed and new readers will want to go back and read the first books.

Ace published Coyote Horizon by Allen M. Steele in 2009. According to Allen Steele the second book in the duology, Coyote Destiny, will conclude the story arc.

Coyote Horizon is available from Amazon and from Fictionwise.
Posted by JC Jones at 5:50 AM No comments:

Beguilement, Legacy, Passage and Horizon are the four books in The Sharing Knife series. This is a continuing story published in four volumes so start at the beginning and read the books in order.

Bujold has created a world where malice’s are the major threat to life. There are two divisions of humans on this world; Lakewalkers who can sense and kill malice’s and the Framers they protect. Neither trusts the other. Lakewalkers keep their abilities secret and do not mix with Farmers. Farmers do not understand or trust those Lakewalker abilities. Many Farmers have never seen a malice and do not believe in the threat that a malice poses.

Lakewalker Dag Redwing Hickory meets and saves Farmer Fawn Bluefield and they do two things that are unthinkable. Together they kill a malice. Farmers never kill malice’s. Then they fall in love and marry. Lakewalkers never marry Farmers. The two main conflicts in the story move from that point. Dag has spent his life fighting malice’s and realizes that Lakewalkers need to work with Farmers if everyone is to stay safe. He and Fawn start a long journey aimed at healing the breach between the two groups.

While this series is different from the Vorkosigan Saga also written by Bujold it carries some of the same themes. Both highlight how people are not as different as they think they are. All it takes is someone willing to look at a problem in a different way and solutions can be found. Like all of Bujold’s books there are well-developed characters, an action filled the plot, and an engaging story in The Sharing Knife series. If you like romance, adventure and fantasy you will love this series.

The books in order are:

The books are available from Amazon.
Posted by JC Jones at 6:02 AM No comments: 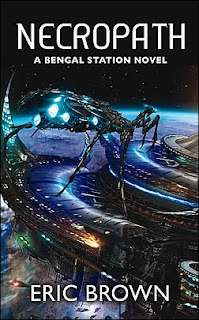 Warning: DO NOT BELIEVE THE PICTURE ON THE FRONT OF THIS BOOK!!!

I stayed confused for the first part of this book because the cover shows Bengal Station located in space. The blurb on the back clearly states that Bengal Station is a spaceport located in the middle of the Indian Ocean but I did not read that before I started the book. The description of the station was not matching the cover location and it took me awhile to sort out what was wrong.

At Bengal Station ships arrive out of the void, dock and have to be checked for refugees from other worlds. That job falls to telepaths like Jeff Vaughan. When Vaughan’s supervisor pulls him away from some of the ships he starts to wonder if something dangerous is arriving. He becomes suspicious of a new religion worshiping an alien god and thinks that it is connected to the unchecked ships. His investigation takes him to a remote colony world where an attempt is made on his life. Then the investigation leads back to Bengal Station where the final confrontation takes place. During all of this Vaughn is fighting the problems caused by the constant barrage of thoughts that invade his mind and the drug he uses to make life bearable as a telepath. Necropath has danger, unusual characters, a great plot and a new take on telepaths.

Necropath is an exciting start to a new three book series by Eric Brown. Xenopath the second book in the series is available now and Cosmopath the third book is coming out in December of 2009.

Necropath is available from Amazon.
Posted by JC Jones at 5:46 AM No comments: 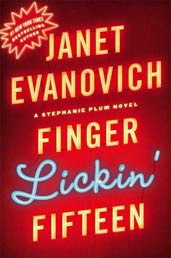 St. Martin’s Press published Finger Lickin’ Fifteen by Janet Evanovich in 2009. Finger Lickin’ Fifteen has the same snappy dialog, crazy situations, great characters and mysteries that are a hallmark of this series. You just have start reading and enjoy a great ride. Stephanie is still a bounty hunter and has sworn off of men for good. Then Ranger asks Stephanie to help find out who is breaking into homes his security firm is protecting. At the same time Morelli is called in when Lulu witnesses a murder. Stephanie may have sworn off men but the two in her life are always around. Add in a barbecue contest with Grandma Mazur and everything heats up. I have read all of the Stephanie Plum novels in order starting with One For the Money. You can start anywhere and once you taste one of the books you will come back for more.

All of the Stephanie Plum novels are available at Amazon.
Posted by JC Jones at 6:05 AM No comments: