I was gardening and traveling in October did not read as much and did not keep up with what I read. Here is a list of what I remember.

You can see how I rated any of these books by clicking on the Goodreads bookshelf on the right.

Gambit by Kim Knox
Petrodor by Joel Shepherd
A Christmas Promise by Mary Balogh
One Touch of Scandal by Liz Carlyle
Mad About the Duke by Elizabeth Boyle
Sinful in Satin by Madeline Hunter
Accidental Wedding by Anne Graci
Aching for Always by Gwyn Cready
The Mists of Time by Susan Squires
Rebel by Claire Delacroix
Borelais: A Space Anthology Book One by Gail Delaney, PI Barrington, and J. Morgan
The Sergeant's Lady by Susanna Fraser
Alien Revealed by Lily Cain
Posted by JC Jones at 11:13 AM No comments:

A Christmas Promise by Mary Balogh 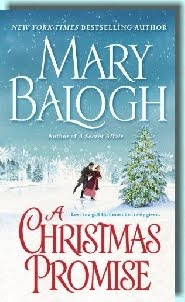 Eleanor Transome is the daughter of a wealthy coal merchant. Randolph Pierce is the Earl of Falloden. Randolph is deeply in debt after inheriting from his spendthrift cousin. Eleanor’s father is dying and his dying wish is to see his daughter married to someone with a title. If Randolph marries Eleanor her father will leave him half of his money and pay off all of his debt. Eleanor agrees only to honor her Father’s last wishes and Randolph agrees to clear his debt. Both Eleanor and Randolph have requests they must honor as part of the marriage agreement.
Randolph thinks Eleanor is a social climber and Eleanor thinks Randolph is one who gambled away his money. The marriage is off to a rocky start. Will Eleanor's Father's dream that the promise of Christmas will bring these two together in the kind of marriage both want work out?

Dell published A Christmas Promise by Mary Balogh in 2010.

I purchased A Christmas Promise from WalMart.
Posted by JC Jones at 11:03 AM No comments:

What I Purchased in October 2010

The Accidental Wedding by Anne Grace
The Iron Duke by Meljean Brook
Steamed: A Steampunk Romance by Katie MacAlister
Warrior (Blades of the Rose) by Zoe Archer
Tracato (Trial of Blood & Steel) by Joel Shepherd
Engineman by Eric Brown

A Christmas Promise by Mary Balogh
Posted by JC Jones at 6:14 AM No comments:

Kiss Me While I Sleep by Linda Howard 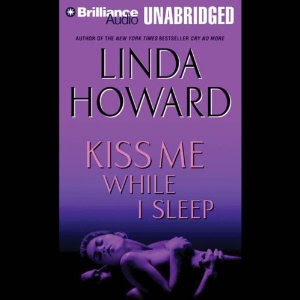 Kiss Me While I Sleep is the second Linda Howard book I have listened to on a trip. Like Killing Time it is a very engaging book to listen to. There is mystery, suspense and romance all combined to keep you on edge. This is one of those books where you just want to keep driving so you can keep listening.

Lily Mansfield is a contract assassin for the CIA. Salvatore Nervi ordered the three people Lily loved most killed. When Lily killed Salvatore she knew her life would be in danger form the Nervi organization and because it was not a sanctioned kill from the CIA. Lucas Swain is sent to bring her in but all kinds of complications cloud the picture. Lily does not know who is Swain. When the two are drawn into an unanticipated and dangerous situation that require working together more than their lives are at stake.

Brilliance Audio produced Kiss Me While I Sleep by Linda Howard with narrative by Joyce Bean and Dick Hill in 2004.
Posted by JC Jones at 12:55 AM No comments:

Death of a Gentle Lady by M.C. Beaton 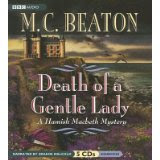 Death of a Gentle Lady, a Hamish Macbeth mystery, by M. C Beaton was one of the three audio books I listened to on a recent trip to Florida. Unlike Agatha Raisin where I have read the entire series, I have skipped around with Hamish Macbeth and have missed many of the books in the series.

I don’t know where Death of a Gentle Lady falls in the series but it is the second book I have read/listened to where Hamish has a Scottish Wildcat as a pet. As a great cat lover I started wondering about Scottish Wildcats so I looked them up on the web. The information and the pictures were very revealing. The Scottish Wildcat is about the same size as our domestic cats but when you look at their picture you can tell this is no tame pussycat. Even in a picture the look in their eyes gives them away. While Hamish has one that is tame all the information I read says that they are impossible to domesticate. They can breed with domestic cats but even then much of the wild behavior remains. You only find them in the Scottish Highlands and they are the last wild cats that remain in any part of Britain. If you want to see what how our house cats looked in the past go to the web and take a look at any of the Scottish Wildcat sites.

Some books are great to listen to and some are not. Death of a Gentle Lady is one that makes a good audio book. Hamish is still having woman trouble. Everything starts where the Mrs. Gentle’s maid comes to Hamish because she is in the country without a visa. Hamish offers to marry her so she can stay but she is murdered on the day of the wedding. Of course Hamish does solve the murder and gets some revenge on his nemesis Blair in the bargain.

The CD-Rom audio version of Death of a Gentle Lady by M.C. Beaton was released in 2008 and was narrated by Graeme Malcolm.
Posted by JC Jones at 12:51 AM No comments:

It is always disappointing when a good place to buy books disappears or changes. That is what has happened since Barnes and Noble purchased Fictionwise. Many of the ebooks Fictionwise offered were in direct competition with Barnes and Noble’s ebooks. On many ebooks Fictionwise’s prices were better and most ebooks were offered in a larger variety of formats. Every week Fictionwise offered four or five of the new releases with a 100% micropay rebate and other new ebooks had smaller micropay rebates that could be used for future purchases. All micropay has disappeared. The new ebooks of many of my favorite authors no longer appear on Fictionwise. The selection on Fictionwise is not as good as before the purchase.

I am sure these steps were taken to drive business to the Barnes and Noble ebook site. In my case the actions have had the opposite effect. I buy fewer ebooks and I no longer buy paper copies from Barnes and Noble. I wonder how many other people reacted the same. Sometimes people do not react as corporations think they will.
Posted by JC Jones at 12:48 PM No comments:

What Distant Deeps by David Drake 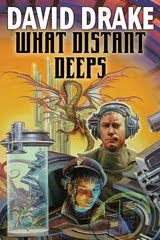 I just read a blog entry that said if an author put in a male and female lead character in a science fiction novel there had to be a romantic element between the two characters. (I was going to write down the blog and the entry but forgot and now cannot find it.) That person never read any of David Drakes' Lt Leary Series. In the series Adele Mundy was off planet when Speaker Leary put down a conspiracy against the government of Cinnabar and beheaded Adele’s mother, father and her 10-year-old sister. Daniel Leary is the son of Speaker Leary and an officer in the Republic of Cinnabar’s Navy. When the two meet on Kostroma they should be mortal enemies. However Daniel and his father do not get along. In fact they do not even speak. Daniel is about all action and Adele is all about information. When the two run into danger they form a perfect partnership without any hint of romance.

I just read What Distant Deeps, the latest book in the series. Daniel and Adele go on a milk run mission to deliver a new Commissioner to a distant and relatively unimportant planet. There is peace between Cinnabar and the Alliance but not everyone wants the fighting to be over. Once again they walk into a situation that needs Adele’s skill in getting information and Daniel’s love a action. Someone is trying to start the war again and Daniel, Adele and a former enemy must work together to keep the peace agreement from falling apart. The Lt Leary Series is a fun space opera where action is the king and there is no hint of romance between the two main characters.

I purchased What Distant Deeps from Baen as an eBook and side loaded it on my Nook. I was very disappointed in how the book loaded. Unlike most books I have loaded before the book did not fit the screen. Many times words were cut in half. The copy was not clean and the book did not read easily. What Distant Deeps was offered as an ARC earlier. I purchased the book after it was released but wondered if the ARC was what I got. This is the first time I have had trouble with a Baen eBook but it is also the first time I have loaded one on the Nook instead of my eBookwise reader. I don’t know if the problem was with Baen or with the Nook.

Baen published What Distant Deeps by David Drake in 2010.
Posted by JC Jones at 5:10 PM No comments: