The Escape Diaries, Life and Love on the Lamb by Juliet Rosetti

Mystery
Mazie Maguire is in prison for killing her cheating no good husband.  The only problem is ….she did not kill him.  Someone set her up with a fake tape taken with a nanny cam.  Sentenced to a life term she has been in prison for four year when a tornado gives her the chance to escape.
I loved how Mazie channeled movie and TV programs to help her during her escape.   Even so Mazie really is not the best escape artist ever.  She stays out more by luck than skill.  It is like watching a train wreck.  You know that she should not do what she is doing but you can’t stop watching.  She goes from one bad situation to another but somehow comes out on top.
Read the Escape Diaries for a quick fun read.  There are some great characters that help Mazie.  I loved Ben Labeck (read the book for his real first name).  He is good looking, very smart and a real gentleman.  Muffin, the dog, is a real scene-stealer.  Eddie and Rico are two wonderful teenager characters.  They add a lot to the humor in the book.  But the very best side character is Magenta who wears a variety of costumes but is a true friend when you need one.
It takes awhile to find out who the bad guy really is.  The program that Mazie and friends set up to out him is great.  Mazie is free at the end of the book but not all is resolved.  According to the note at the end of the book Juliet Rosetti "is plotting new escapades for Mazie Maguire.”  Sound like there is more fun in store.
I received a free copy of The Escape Diaries from Netgalley.   You can click here to read a free sample of The Escape Diaries.
Loveswept published The Escape Diaries by Juliet Rosetti in 2012.
Goodread Summary:
Introducing the hilarious new heroine, Mazie Maguire, in Juliet Rosetti’s irresistible debut novel that follows the outrageous adventure of a woman on the run.

Wrongly convicted of killing her philandering husband, Mazie Maguire is three years into her life sentence when fate intervenes—in the form of a tornado. Just like that, she’s on the other side of the fence, running through swamps and cornfields, big box stores and suburban subdivisions. Hoping to find out who really murdered her husband, Mazie must stay a few steps ahead of both the law and her mother-in-law, who would like nothing better than to personally administer Mazie the death penalty via lethal snickerdoodle. With the Feds in hot pursuit and the national media hyping her story, Mazie stumbles upon a vast political conspiracy and a man who might just be worth a conjugal visit—if she survives.
Posted by JC Jones at 1:00 AM No comments:

Steampunk Audio Book
Goodreads Summary:
"Inspired by two of the most beloved works by literary masters, "All Men of Genius "takes place in an alternate Steampunk Victorian London, where science makes the impossible possible.
Violet Adams wants to attend Illyria College, a widely renowned school for the most brilliant up-and-coming scientific minds, founded by the late Duke Illyria, the greatest scientist of the Victorian Age. The school is run by his son, Ernest, who has held to his father's policy that the small, exclusive college remain male-only. Violet sees her opportunity when her father departs for America. She disguises herself as her twin brother, Ashton, and gains entry.
But keeping the secret of her sex won't be easy, not with her friend Jack's constant habit of pulling pranks, and especially not when the duke's young ward, Cecily, starts to develop feelings for Violet's alter ego, "Ashton." Not to mention blackmail, mysterious killer automata, and the way Violet's pulse quickens whenever the young duke, Ernest (who has a secret past of his own), speaks to her. She soon realizes that it's not just keeping her secret until the end of the year faire she has to worry about: it's surviving that long."
I picked this up off of the new audio books shelf at my local library. I got a recommendation as I was checking it out.  “You will love the humor” was the comment.  They were right.  As I listened to the book I had many laugh out loud moments.  Violet, Ashton, Jack Cecily, Miriam, Drew, Toby, The Duke, and Fiona along with all of the other side characters were wonderful.
I did have to suspend disbelief when reading that Violet managed to pass as a man for an entire school year but that was part of the fun of the book.  I enjoyed the world building.  The inventions were really unique.  Look for the one that the housekeeper came up with.
In the middle of a lighthearted tale the book did deal with some serious issues in a way that did not detract from the story.  I had a lot of fun listening to All Men of Genius and was sorry when the story was over.
All Men of Genius is Lev AC Rosen’s first published book.  I hope to see more about this Victorian Steampunk world he has created.
Recorded Book published All Men of Genius by Lev AC Rosen in 2012.

Alien vs Alien by Gini Koch

Paranormal
Goodreads Summary:
For her entire life, Melanie Landon has hidden the fact that her halfsister Ann is a shapeshifter—determined to protect Ann from a world that simply wouldn’t understand.
After months of no contact, Melanie fears the worst when a man shows up on her doorstep saying he’s there about her sister. A freelance writer, Brody Westerbrook intends to include Ann in a book about the existence of shapeshifters. While Melanie is immediately drawn to the stranger, she knows revealing Ann’s secret isn’t an option.
Protecting her sister has always been such an enormous part of Melanie’s life, but when Ann finally appears looking frail and sick, Melanie must come to grips with the fact that saving her may mean letting go.
Still Life with Shape Shifter is the second book in the Shifting Circle Series.  Even though it features shape-sifters it is really a story about love, love in all of its forms.  I always call Sharon Shinn’s stories gently stories.  Don’t look for non-stop action, a lot of sex, or over the top stories.  She writes in a very down to earth style with a lot of character development that builds the story.
Several of the characters for A Shape of Desire are in Still Life.  Dante and Maria are side characters here but William is one of the main characters.  Still Life follows two women,, Janet and Melanie.  Both love a shape-shifter but in very different ways.  For the most part their lives are separate but both face loving and losing the person they love.  This is the story of how they face that impending loss.
There are other characters that play a major part in the novel.  Brody is almost too good to be true.  He meets Melanie and has to work hard to win her trust.  Melanie’s best friend, Debbie is just the kind of best friend everyone wants to have.  Janet also has friends that supply a support for her.
Each woman’s story is separate and unique but in the end they meet in a sad but true way.  There is room for future stories in this universe and I hope more are written.
ACE published Still Life with Shape-Shifter by Sharon Shinn in 2012.
Posted by JC Jones at 1:00 AM No comments:

Did you get gift cards for Christmas?  If you haven't had your fill of Christmas Stories here are some others to put in you stocking today.

Mackenzie Family Christmas: The Perfect Gift by Jennifer Ashley - This one is great novella for anyone who has been reading the Mackenzie Family books.  The story features all of the Mackenzie brothers and their wives.  I loved it because Ian was featured more than any other.  There were also characters that may be featured in future books.  I though I saw foreshadowing for at least two new books.

One Snowy Night Before Christmas by Pamela Fryer - This one was free on Amazon.  It turned out to be a really sweet Christmas story.  I loved both of the main characters and was pulling for them both.  Then there was Santa Claus.  If you don't believe before the story you will after you finish it.

Five Golden Rings: A Christmas Collection by Sophie Barnes, Karen Erickson, Rena Gregory, Sandra Jones, and Vivienne Lorette - This is a collection of five stories set at Christmas.  Each is set in a different time and I enjoyed each one.

Hope everyone is ready of Christmas.  I have finished everything and am spending the day reading. 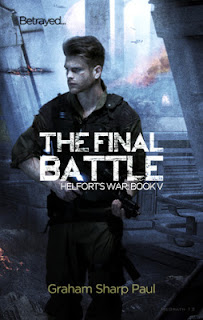 Cowed into appeasement by the threat to destroy their home planets with antimatter warheads, the Federated Worlds are a spent force. Only a ragtag rebel army stands between the Hammer of Kraa and total victory. The consequences of that triumph are too terrible to contemplate. Thousands of worlds will be subjugated, millions murdered, and billions enslaved by an empire spanning hundreds of light years, an empire fuelled by blood, an empire built on the bones of its enemies. The rebels need help; without it, they too face annihilation. And their time is running out, fast. Michael Helfort?s mission is simple: persuade the reluctant Feds to give the rebels the support they need to defeat the Hammer of Kraa. And, with the future of all of humanspace at stake, he cannot fail. But when Michael is betrayed by those he trusts most . .

I have been reading the Military Science Fiction series from the beginning.  When I got this one I was surprised by the book.  It is not a trade paperback like the previous four.  When I check the published I saw that none was listed.  Seeing that I realized that it was self-published.  I could not find anything to confirm what I decided but it looks like this is another series that the publisher canceled with only one book left.  Today when this happens an author can self-publish and let his readers finish the series.

This one lives up to the previous books.  Full of surprises,  action, and good characters it is a good finish to the series.  Thanks Graham Sharl Paul of writing and publishing the last book in this series

The Final Battle by Graham Sharp Paul was published in 2012.