Discussion of a Decent Dream by E. Curtis - Virtual Book Tour and Giveaway

Discussion of a Decent Dream
by E. Curtis

In the fall of 1789, on the western edge of the Yorkshire Dales, a dense, persistent fog enshrouds the village of Ingleton. Shadowed spirits hide in the mist and bedevil the townsfolk, heralding a tragedy that has befallen one of their own.

Edmond continues to search for Alexandra, his fiancée, who disappeared the same night that the mist set upon their town. Presumed dead by all others, he visits Alexandra's empty grave, desperate for any hint of what has become of her. Weary from the sleepless nights on his quest, no longer able to stay awake, Edmond falls into a dream before her headstone and there obtains clues from Alexandra as to her whereabouts.

Haunted all the while by a malevolent spirit, Edmond follows the trail that Alexandra left for him and enters the underworld, only to learn that he has been there before, and in fact, quite often. But more, he discovers how he is to blame for Alexandra's disappearance.

A dark literary novel rich in imagery, Discussion of a Decent Dream unearths the consequences of a child's decision to surrender his heart in exchange for unholy power and transcendent knowledge.

Discussion of a Decent Dream is a Finalist in Britain's Wishing Self Book Awards in the Adult category.

We ignored the portent that crept into the countryside the day she disappeared. But in the weeks that followed, with no answers as to what had befallen her, with no assurance that she still lived, we came to understand, and most saw the worst in the blanket of mist that stopped time and shut us out from the rest of the world.

I had just turned twenty-one the summer of 1789 when Alexandra went missing. And after all our fruitless searching, in need of some direction, I snuck, under the cover of night, into the yard where her parents had laid their sorrow to rest. Falling to my knees before the stone of her empty grave I spoke with reverence, not for the hallowed ground, but for the call that brought me, as though somehow she could hear me.

To Find Out More about E. Curtis read the interview below:

What group did you hang out with in high school?

I was an everyman, accepted into and adapted to a variety of groups, from the jocks to the nerds, from artsy groups to the goths.

What are you passionate about these days?

Food, drink, tobaccos, music, and what is revealed in the ether.

If you had to do your journey to publication all over again, what would you do differently?

Get the first draft to an editor more quickly rather than try to fix it on my own.

E-book or print? And why?

I prefer print for the tactile sensual experience of reading. An e-book is cold, lifeless. However, there is great joy in the convenience of taking many books in a small package wherever you want to go. I often use my tablet for final editing, seeing the novel in its final form, looking for typos and the like.

What is your favorite scene in this book?

All of Chapter Five, as it was my own inciting incident, the dream I had from which the chapter is drawn. Chapter Five started it all. In the hall of paintings, Edmond learns more of Alexandra’s fate. Alice in Wonderland blended with Dante’s Inferno. Chapter Eight is also a favorite, for the mood and experience, the first conversation/battle with Edmond’s demon the Figure, it is wicked and mind-bendy.

My favorite line, though, is: Rather I raced through odd fashions of knowing, posed in scratched and discolored celluloid frames, formed in fixed positions, and I remembered. 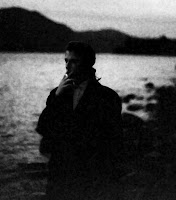 E. Curtis draws on personal experiences of the otherworldly for his writing. Through dreams, visions, and waking encounters, his exposure to darkness has motivated him to detail what he has come to know of the preternatural. While a few short pieces have been published on an online literary magazine, Discussion of a Decent Dream is his first novel.

Thank you so much for taking time to bring to our attention another great read. I appreciate it and thank you also for the giveaway.

What types of books do you like to read?