It Started With a Kiss
by Ella Quinn 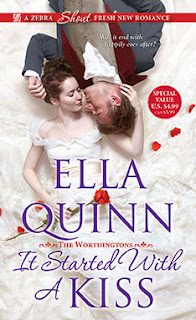 What is a young Worthington woman to do when the man of her dreams is not who she thinks he is?

This season, all eyes are on the Earl of Worthington’s spirited, beautiful sister, Lady Louisa Vivers. Many gentlemen are vying for her attention in and around the ton. Yet, Louisa longs for someone who can take her beyond the ballroom—a man who is worldly, adventurous, and passionate. She won’t settle for just any suitor. She wants her true soul mate—and she’ll know him when she sees him.

Is Gideon, the Duke of Rothwell, him? The moment he and Louisa meet, they share a powerful attraction. Rides at sunrise and waltzes at dusk follow. Finally, Gideon can no longer resist the urge to embrace her, and Louisa is sure he will ask for her hand. But Gideon believes he is in no position to marry. The Rothwell estate has gone bankrupt, a scandal simmers in its wake, and he has nothing left to offer. Now, he must decide if he will let pride stand in the way of true love—or if he will risk everything, and let the lady decide for herself…

Lady Louisa Vivers is strong, knows her own mind and is ready to help the man she falls in love with. Gideon, the Duke of Rothwell falls for Louisa but has some troubles he does not want to share. I could see the train wreck approaching but did not see when or where. Secrets have a way of coming out in the worse possible way and Gideon learns that lesson the hard way. Both Louisa and Gideon were great characters and the rest of the Worthingtons played an important part in the story line. A nice addition to the series.
~~~~~~~~~

Dawn had broken only a few minutes before, but a light fog clouded the air making the sun look like a small yellow ball. Gideon, Duke of Rothwell, was certain he was the only rider at this hour of the morning. Needing the calm a hard ride gave him, he thundered down the empty carriage way. Suddenly, from out of nowhere, a dark bay burst through the mist, disturbing his solitude. Yet it was the massive dog, almost the size of a pony, keeping pace with the horse that caught his notice.

Faisu, his black Murgese stallion, pranced nervously as Gideon brought him to a halt. “Easy, boy. We don’t need that beast tangling with you. He could sever your hamstrings in an instant.”

A moment later, a twist of long, dark hair pulled loose from under the rider’s hat, riveting his attention on the woman. By the time she was even with him, he’d taken in the neat figure encased in a dark blue riding habit, and her excellent seat.

She glanced over, slowing her horse for a bare moment as she passed him. Her cheeks were pink from the cool air and a smile graced her lush rose lips. Their gazes collided and held. As if they were the only two people on earth. In that second, Gideon felt as if he would tumble into the vivid blue of the rider’s eyes that reminded him of lapis.

She cannot be real.

He blinked and she was gone. He might have dreamed her except that a few seconds later, a groom raced by, clearly attempting to catch up with his mistress.

For a moment he was tempted to follow as well, but it wouldn’t do him any good. She was obviously a lady, and even if he could obtain an introduction, and their relations proceeded satisfactorily, he was not yet in a position to wed.

It was pure fantasy to think of marriage in conjunction with a woman he’d seen in passing. Still, he would have liked to have been able to dream.

Blast Father! If he were still alive, I’d shake some sense back into him.

But the old duke had been in the ground for over three months when Gideon had returned from Canada. Now all he could do was pick up the pieces his father had left behind.

Bestselling author Ella Quinn’s studies and other jobs have always been on the serious side. Reading historical romances, especially Regencies, were her escape. Eventually her love of historical novels led her to start writing them. She has just finished her first series, The Marriage Game, and her new series, The Worthingtons, began in April 2016.

She is married to her wonderful husband of over thirty years. They have a son and two beautiful granddaughters, and a dog. After living in the South Pacific, Central America, North Africa, England and Europe, she and her husband decided to make their dreams come true and are now living on a sailboat cruising the Caribbean and North America. Europe is next!

Ella will be awarding an Autographed ARC of  IT STARTED WITH A KISS (US Only) to 5 randomly drawn winners via rafflecopter during the tour.

Great to have you here today. I enjoyed reading the book. Great plot and story line.