Entromancy: Book One of the Nightpath Trilogy - Virtual Tour and Giveaway

Entromancy: Book One of the Nightpath Trilogy
by M.S. Farzan

2076 is not a good year to be a special agent. A quarter of the world's power runs on ceridium, a newly discovered element that has had the unintended consequence of spawning a new race of people, and several forms of magic that were once thought to have been forgotten. Eskander Aradowsi is an agent of NIGHT, a paramilitary force created to contain and control this new perceived threat, but he soon learns that not all within his organization is as it seems. A botched mission turns out to be the least of his troubles, when he unearths a plot that threatens the uneasy truce between the aurics and humans of San Francisco, and centers on a form of magic that toys with the very fabric of the universe: Entromancy.

“How many out there?” a voice buzzed through my earpiece.

I watched the city below carefully, standing stock still as the evening breeze whipped my coat behind me.  The bright neon lights formed an iridescent halo through the layer of fog that had begun to coalesce, but I could still pinpoint a handful of signal markers within the haze.  The ancient radio tower loomed behind me forlornly like a ruddy tuning fork sticking out of a concrete mound.

I tapped a button on my digitab, magnifying a selected portion of the cityscape through my lenses.  “Three,” I replied.  “Two on Columbus-Farrow and one downtown.”

I grimaced at the racism, but said nothing.  Marking the three waypoints on my digitab’s city map, I hurried back to the cruiser bike.

“HQ wants you to prioritize the downtown storefront,” the voice continued.  “Intel says that it’s set to go nova first, and there’s no telling what these gutter trash will do when we expose them.”

I nodded to myself as I mounted the cruiser, passing a gloved hand over the vehicle’s blinking security console.  Its engine instantly came to life, cold blue light spilling out of the bike’s casing.

“Oh and, Nightpath,” my earpiece buzzed.  “Bring me a couple of knife-ears as souvenirs, will you?”

I tensed on the bike, disgusted by the snickering I could hear in the background.

The laughter stopped abruptly.  “Just get it done,” the voice said, and the earpiece clicked.

Q: How do you do your world building?

A: Building Entromancy’s world was a 4-year process of stockpiling notes about characters, themes, magic systems, and plot points in a Google document and waiting for an opportunity to unfold the narrative around them.  I wanted to make sure that I was working with magic and political systems that were already internally consistent when I started writing the manuscript, and it took quite a lot of time – and revisions – to come up with something that felt workable.  Once all of the pieces were in place, the actual writing of the manuscript came together rather quickly; I think the first draft of the whole thing took no more than six months.

As Entromancy is the first novel in a series, I’m really glad that I took that time to build out the setting so thoroughly.  I’m continually drawing from the book’s initial platform as I write in that world.  I’m currently working on the second and third installments in the trilogy, as well as a roleplaying game that draws upon the story’s main themes.  I’m finding it really helpful to have a solid base from which to explore other stories and characters, and keep adding to the world and discovering new things about it as I write! 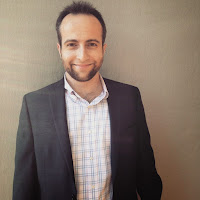 M. S. Farzan was born in London, UK and grew up in the San Francisco Bay Area. He has a B.A. in Integrative Biology, M.A. in Religious Leadership for Social Change, and Ph.D. in Cultural and Historical Studies of Religions. He has written and worked for high-profile video game companies and editorial websites such as Electronic Arts, Perfect World Entertainment, and MMORPG.com, and has trained in and taught Japanese martial arts for over ten years. He also enjoys soccer, baseball, and games of all kinds.

The author will be awarding a $25 Amazon or B/N GC to a randomly drawn winner via rafflecopter during the tour.

a Rafflecopter giveaway
Posted by JC Jones at 2:30 AM

Congrats on the book tour! I'm a huge sci-fi fan and I enjoyed reading the excerpt. I'm looking forward to reading this book and the others in the trilogy.

Thanks so much for hosting me today!

Thank you for the excerpt.

Thanks everyone for reading, and JC Jones for hosting me today! Please feel free to get in touch! :)

What book are you looking forward to reading in the next few months? Thanks for the giveaway. I hope that I win. Bernie W BWallace1980(at)hotmail(d0t)com.

Great excerpt, I enjoyed reading it! Thanks for sharing :)

Great question! I have a copy of "Play It Loud: An Epic History of the Style, Sound, and Revolution of the Electric Guitar" sitting on my shelf that I've been meaning to dig into. What about you?

I really enjoyed reading the entire post today. This is a new author for me so thank you for the reveal!