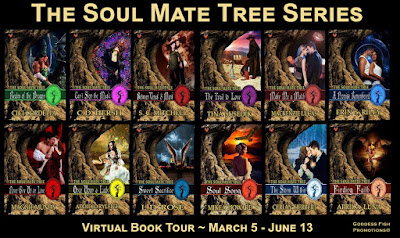 An ancient legend spanning eras, continents, and worlds.
To some, it’s nothing more than a dream.
To others, a pretty fairy tale handed down through the generations.
For those in critical need of their own happy ending, a gift.

THE LEGEND OF THE SOUL MATE TREE

I am old, I am ancient, my purpose is clear
To give those who are needy a treasure so dear.
They who come to my roots, touch my bark, stroke my leaves
Find the soul of their lives if they but believe.
When I call and you listen, your prize will be great
If your heart remains open and you don’t hesitate.
Do you yearn? Be you lonely? Is your time yet at hand?
Reach for me and I’ll give to you. I’m yours to command.
For your trust, for your faith, keep my secrets untold
And I’ll gift you forever, to have and to hold.

If you’ve ever seen my posts on social media, there are some things about myself that are very transparent. Such as, I’m a Regency romance author. I’m a hockey mom to three amazing boys. And, I drink coffee…a lot. But some things are not as obvious and here are a few.

1.    I’ve been married to my high school sweetheart for 15 years. I’m still trying to figure out where the years have gone.
2.    I grew up on a farm in central Minnesota where we raised first pigs and then calves. My parents still operate the same farm, which is about 10 miles from where I currently live. Yes, I’m a small town girl at heart.
3.    I wanted to be a movie director when I wasn’t thinking of being a marine biologist. But even then, I was “writing” movie scripts so it has always been writing for me.
4.    Before I had kids, I owed a ferret, two sugar gliders, five hedgehogs, and too many chinchillas to count. I’ve since replaced them with three monkeys, also known as my children.
5.    I’ve become rather handy over the years. I’ve remodeled my kitchen, built an outside chicken run, a quail cage, and a desk…hopefully soon a coffee bar for my writing nook. I’ve also fixed the AC in my van and our 4-wheeler a time or two.
6.    I graduated collage with a major in accounting and a minor in computer science and worked in public accounting for 7 years.
7.    I have a day job as a financial coordinator for an orthodontist office.
8.    I haven’t traveled outside of Minnesota much, but other than surrounding states, I’ve visited California twice, Germany once and would love to see to England and Italy.
9.    I paralyzed my vocal cord when I was twelve. While I’ve regained use of my voice by my other vocal cord overcompensating, the nerve never fully healed and is still paralyzed.
10.  Thanks to my middle son, I’ve become a fish hobbyist. We just recently set up a 72 gallon tank after getting a 60 gallon tank last year. We now have a green severum (Serenity), a gold severum (Goldberg), a green terror cichlid (Trout), albino rainbow shark (Whitey), three plecos (Piper, Penelope, Phillip ), a pictus catfish (Whiskers), three gourami fish (Greta, Gilbert, Sunny), and a spotted Raphael catfish (I think his official name is Rafe but we call him Fatty because he is one chunky little guy who is rarely seen). There are also no-named black kuhli loaches, zipper loaches, and a couple danios. I’m rather hooked and would really love to have a flowerhorn cichlid someday.

So, when I’m not creating a new story, reading a book, or drinking coffee, you’ll most likely find me at a hockey rink or a soccer field but there is also a good chance I’ll be building something or cleaning a fish tank.

Her love and passion for romance books started young and she became hooked on historical romance (particularly Regency) after graduating from Lurlene McDaniel’s young adult books.

Currently, Addie Jo reads any genre that keeps her reading into the early hours of the morning.
Addie Jo lives in the same cold-winter-hot-summer area of Minnesota she discovered as a child. Sharing in the raising of her three high-energy boys is her very understanding husband who graciously endured being dubbed “The Duke” by his co-workers. Keeping Addie Jo company while she writes is her young at heart yorkipoo, Bella. Meanwhile, her other four-legged family members (a black lab, Max, and a red lab puppy, Cozmo) are usually in cahoots with her children to create endless distractions.

When not playing chauffeur for her hockey-playing boys (and being a soccer mom in the offseason) or writing her next story, you’ll find Addie Jo with an ever-present cup of coffee in one hand and a book in the other.

Respectable Lady Katherine Baxton, striving to meet the requirements of her station, has become the ultimate dutiful daughter. And now, the Duke of Blackthorn’s betrothed. Far from a love match, Kate is nevertheless determined to do as expected and marry.

That all changes the night she panics at her impending future and runs, stumbling upon a private grove, a mysterious tree . . . and a half-naked man.

The youngest son of a viscount widely thought to have purchased his title, Jackson Cooper demonstrates his disdain for the aristocracy by affording himself every luxury available—drinking, wenching, and gambling—while eschewing anything representing the ton. Jackson has little care for his reputation and no desire to marry. His escape from London is all but complete.

Until fate—in the form of a beautiful, mysterious lady—interrupts his plans, enticing him with the very thing he never wanted.

“Aren’t sprites confined to the trees?” His deep voice washed over her.

She didn’t turn to acknowledge him. “How nice to see you properly dressed for once.”

His chuckle warmed her. “Are you following me?”

An unladylike snort refused to be repressed. “Hardly. You are rather difficult to overlook, being the only unknown face here.”

Kate wished she’d listened to her sister and worn a bonnet. Anything to mask the heat flaring in her cheeks.

Thankfully he remained at her side and hadn’t a clear view of her face. “We have not been introduced. I can’t be seen speaking to you.”

“Then let us go where we can't be seen.”

Her heart raced at his boldness. Why was this man so tempting? She was spoken for, though still unofficially. Proper ladies didn’t follow strange men to private locations, regardless of their marital status. “Absolutely not.”

“Even if I have something of yours?”

Blast! Her ring. Given her luck lately, she would have lost it in the grove of all places. Her aunt would toss in her grave knowing Kate had misplaced her gift.

“A true gentleman would return it.”
His deep laugh caused her pulse to flutter. “I'm no gentleman. Or haven't you heard?”

One randomly drawn commenter will receive a $50 Amazon/BN GC. 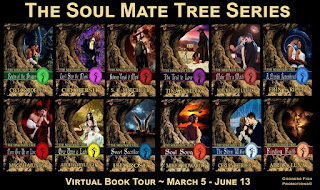 My family loves reading so hearing about another great book I appreciate. Thanks for sharing and also for the giveaway.

Addie Jo love your book. As authors of book two in this series, Can't Stop the Music, we were happy to see you join the team. Good luck with sales.

Thanks for hosting Addie Jo today! Her book was such a lovely addition to the Soul Mate Tree Series. I'm Char Chaffin, one-half of CiCi Cordelia who also wrote for the series, and one-half of the mastermind behind the Soul Mate Tree conception. Thrilled to know so many readers have been following the boxed set tour and enjoying all the books within!

Hi, I'm Cheryl Yeko, the other half of CiCi Cordelia, and author of book 1 in this fantasy series, Realm Of The Dragon. We hope you check out and enjoy all these amazing stories. You can find the complete box set here: www.amazon.com/gp/product/B07PKRKCH9 :) Don't forget to enter the contest!! Good luck...

It was so great working with Addie Jo and the other Soul Mate authors on this project. Her contribution to the set is a really fun read. Highly recommended.

I so enjoyed Addie Jo's contribution to The Soul Mate Tree. Kate's spunk made 'Once Upon a Lady' a fun read. Book 12 of the collection, 'Finding Faith', is my installment in this paranormal series. Happy reading everyone.

Addie Jo, so fun reading about you. Love how handy you are. A chicken run! Fascinating to see a 360 view of people. Happy writing!

I loved learning about you. You sound like a country girl like me. Although I live in the city for the past three years, I'm a country-born, country-loving girl. Loved your story.

Someday I hope to go to the high school hockey championships in MN...and I'll miss the All-National Hockey Hair team, too!

Thanks for the chance to win!

Yay...I think this might work. I've been having issues lately posting on blogs. Thank you so much for hosting me and Once Upon a Lady today. It is great to be able to share my part of the Soul Mate Tree Series, and a little bit more about myself :-)

Trix - yes, I'm going to also miss the All-National Hockey Hair team! :-( I was crushed to hear this was the last year. He always does such great job and it never fails to be entertaining. Hopefully some day I'll be at the tournament watching my boys - hehe. Thanks for stoping in <3

We loved this book! So proud to be part of this series:)

What books are you looking forward to reading in 2019?

Love hearing about your series.

Who is your favorite author currently still writing?