Along Came A Duke (Rhymes With Love) by Elizabeth Boyle 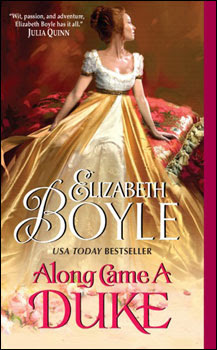 Historical Romance
Along Came a Duke is one of the books I got from Amazon Vine this month.  I like books by Elizabeth Boyle and this one is no exception.
Before I begin here is what Goodreads has to say:
"A young lady with a fortune is subject to all sorts of untoward attentions by the worst sort of vagrants.” Aunt Allegra

A lesson Tabitha Timmons, a penniless spinster, has never needed to heed. That is, until she is left a vast fortune payable only upon her marriage to the very respectable Mr. Barkworth—a match that offers little chance of discovering exactly what her aunt means by "untoward attentions."

But the same can't be said when the Duke of Preston happens along Tabitha's path. He spies a rebellious streak in her that matches his own and he makes it his mission to save her from such a passionless match, interfering in her life at every turn. All too soon, Preston—whose very name spells ruin—has Tabitha caught between the good fortune that guarantees her security,and his kiss, which promises an entirely different kind of happily-ever-after."
This has quite a few laugh out loud moments in it.  The two main characters are wonderful.  Preston is that mixture of rogue and enduring little boy that women love.  He doesn’t know it but he has been looking for a way to go home since he was six and with Tabitha he finds what he has been looking for.
Tabitha or Tabby as Preston calls her has not had an easy time since her parents died.  She is strong but feels trapped by everything that is happening around her.  Even when it looks like something good has happened she is not in control.  It takes Preston to break her out of her situation.
I loved the side characters.  There are four who are slated to be the main characters in the next two books.  They were very well developed.  Another well developed secondary character is Tabby's dog, Mr Muggins.  He play a key role in several scenes.
The plot was predictable but the journey to the HEA was a lot of fun.  Boyle put in enough twists and turns to hold my interest.
Along Came a Duke is a good start to a new trilogy and I look forward to the next two books.
Avon published Along Came A Duke by Elizabeth Boyle in 2012.
Posted by JC Jones at 2:30 AM