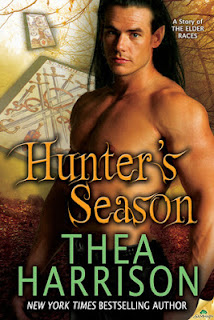 Hunter’s Season is a novella set in the Elder Races Universe.  That deck of Tarot cards that have appeared in the two previous novellas show up again.  I just knew when I saw them again that an HEA was in the works.

Here is the Goodreads summary:

Duty. Devotion. Desire. When fate brings two isolated people together, love is in the cards.

As a palace guard and assassin for the Dark Fae, Xanthe always wore a mask, hiding her emotions to do her duty. But when her identity is compromised, she trades undercover work for guarding Queen Niniane—a position that often brings her in contact with Chancellor Aubrey Riordan.

Aubrey’s trust is shattered. A year ago his wife tried to assassinate their new queen in his name, a betrayal of everything he believes in. And now an attack on his life is proof the dark conspiracy is not yet over. Although injured and weak, Aubrey can’t help but be drawn to this shy assassin and loyal protector. Xanthe is everything Naida wasn’t, and the passion she stirs in him is something he thought had long passed him by.

Warning: Take a man recovering from an assassination attempt, the assassin sworn to protect him, add in a magical Tarot card deck and an isolated cabin, and watch the sparks fly!

Xanthe and Aubrey are both great characters and I was pulling for them to get together.   Xanthe has admired Aubrey for a long time but would never act on that admiration.  When he is injured Niniane notices Xanthe’s concern for Aubrey and acts.  Niniane can be very sneaky why she wants to.

Look for a small cameo character.  Mouse was created by the winner of the “Create am Elder Races Character” contest and has a small part in the novella.

I needed an Elder Races fix and Hunter’s Season fit the bill. Lord’s Fall, the next novel in the series, came out several days ago so I will get another big fix soon.

This seems like a nice read and since I haven't heard of it before, it'll be something different! Thanks for sharing and great review. :D