A Spy To Die For (Assassins Guild #2) by Kris DeLake 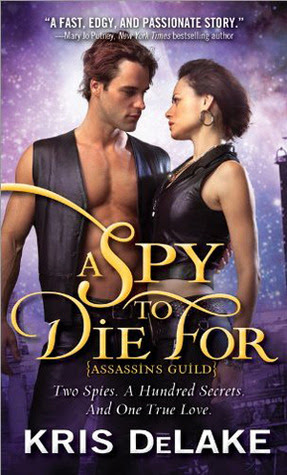 Profile: Main investigator for the loosely federated Rover Assassins. Guided by a strict moral code, fierce loyalty, and a sense of duty.

More Than Sparks Will Fly

On opposite sides of a high-stakes game, lust lures two spies together in a passionate encounter. Little do they know that the heat of the moment would bind them, turning their worlds upside down. Hunted by deadly assassins, can the pair and their love withstand the onslaught?"

Characters:  Sky and Jack are both great characters.  Both have secrets, both have trouble trusting and both usually work independently.  It is fun to see what happens when they have to work together to survive.

Plot:  I thought the plot here was a little weak.  The book is more romance centered than plot centered.  This is more of a small splinter off of the plot in Assassins In Love but it is still a fun read.

A Spy To Die For is a fun light read.  It is a good place to get your SFR (Science Fiction Romance) fix so pick it up.  Even though it is book 2 in the Assassins Guild series it can stand-alone but pick up Assassins in Love for a double SFR fix.

Sourcebook published A Spy To Die For by Kris DeLake in 2013.

Kris DeLake is a pen name for Kristine Katherine Rusch.  I received an ARC of A Spy To Die For from Netgalley.

The book will be released July 2, 2013.  You still have time to pre-order so you can start reading as soon as it is released.
Posted by JC Jones at 1:00 AM

I haven't read any of this series yet, but it is on my TBR. Thanks for the post.