Leviathan (The Lost Fleet: Beyond the Frontier #5) by Jack Campbell 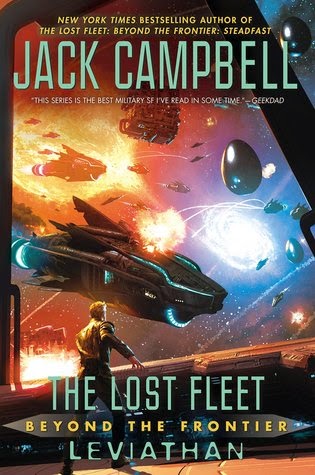 Two Syndicate World star systems have fallen prey to a mysterious fleet of warships—a fleet controlled entirely by artificial intelligence—that is now targeting Alliance space. The warships are no mystery to Geary. They were developed by his government to ensure security, but malfunctioned. If the Syndics learn the truth, the war with the Alliance will resume with a vengeance.

As the government attempts to conceal the existence of the A.I. warships—and its role in their creation—Geary pursues them, treading a fine line between mutiny and obedience. But it soon becomes clear that his fleet is no match for the firepower of the machine-piloted armada.

With the help of the Dancer species of aliens, Geary has tracked the A.I. ships to their secret base in the supposedly mythical Unity Alternate star system where his fleet, the last hope of the Alliance’s future, will end the conflict at any cost.

I was disappointed in Steadfast, the last book of the series, but Campbell is back on track with Leviathan.  Once again Geary has to save the Alliance.  This time he has to save it from its own mistake.  He does not do it alone. The final save comes from a very unlikely source.

If you like space battles, interesting characters, unusual aliens and impossible odds Leviathan is for you.  It can read as a stand-alone but read the entire series starting with The Lost Fleet for maximum enjoyment.

I received an ARC of Leviathan from Netgalley in return for  an honest review.