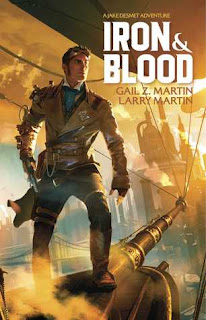 A Steampunk novel set in the fictional city of New Pittsburgh.

New Pittsburgh in 1898, a crucible of invention and intrigue, the hub of American industry at the height of its steam-driven power. Born from the ashes of devastating fire, flood and earthquake, New Pittsburgh is ruled by the shadow government of The Oligarchy. In the abandoned mine tunnels beneath the city, supernatural creatures hide from the light, emerging to feed in the smoky city known as 'hell with the lid off.'

Jake Desmet and Rick Brand, heirs to the Brand & Desmet Import Company, travel the world to secure treasures and unusual items for the collections of wealthy patrons, accompanied by Jake's cousin, Veronique 'Nikki' LeClerque. Smuggling a small package as a favor for a Polish witch should have been easy. But when hired killers come after Jake and a Ripper-style killer leaves the city awash in blood, Jake, Rick and Nikki realize that dark magic, vampire power struggles and industrial sabotage are just a prelude to a bigger plot that threatens New Pittsburgh and the world. Stopping that plot will require every ounce of Jake's courage, every bit of Rick's cunning, every scintilla of Nikki's bravura and all the steampowered innovation imaginable.

Iron and Blood is an action driven story filled with magic, great inventions, ghosts, vampires and witches (most who are male).  While the action does drive the story there are a whole cast of characters who are part of the action.

Rick Brand and Jake Desmet are a big part of the story line and the action.  For everything to work there has to be world building and back-story.  The story line helps with the world building.  The back story is worked into the dialogue.  There is often mention of past actions taken by the characters that highlights the fact that each has seen danger and action in the past.

While Rick and Jake are main characters this is not an all male crew.  Nikki, a cousin of Jake’s takes a major role in the story and she is joined by several very capable female friends who are part of the action.

Big parts of the fun in the book are the inventions.  As the story progresses the danger requires more unusual weapons and accessories.  There is a great character who lives to invent and comes up with what is needed each time.

Iron & Blood is the first book in a new series and while the big problem is solved there is a big loose end that will be around for the next book.  Look for the curse at the end.  I think you will find it to be very familiar and one that means that the characters will have many more adventures.

This is the first time that both Gail and Larry Martin have officially co-authored a book.   Gail says in the notes that they have often worked together on previous books and the time just seemed right for both names to appear on the cover.

I received an ARC of Iron & Blood from Netgalley in return for an honest review.
Posted by JC Jones at 8:47 PM