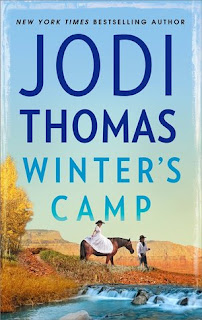 New York Times bestselling author Jodi Thomas has captivated readers around the world with her sweeping, heartfelt family sagas. To introduce her brand-new series, Jodi tells the story behind the unforgiving Texas landscape and how one man claims Ransom Canyon—and a timid beauty—for his legacy…

A wanderer’s life was all James Randall Kirkland had known since he was an orphaned boy in San Antonio. And while years of adventure had satisfied his younger self, now he’s longing to put down roots of his own and is prepared to go it alone. But when he sees the Apache slave woman with the startling blue eyes, the course of his journey is changed forever.

Ever since the Comanche raided her village and took her for their own, Millie hasn’t known any kind of freedom. After years of being outcast, beaten and traded from tribe to tribe, she’s unprepared for James’s patient tone and gentle ways. Still, as her handsome savior slowly earns her trust, Millie struggles between desire and fear, sure it’s just a matter of time before James tires of her and her burgeoning feelings are nothing but another wasted memory.

Winter’s Camp is a prequel to Thomas’ new Ransom Canyon series.  In the story we meet the two families who first settled near Ransom Canyon.

James Randall Kirkland is a survivor but he has tunnel vision.  He has always wanted his own spread and now that it is coming true all he cannot think about anything thing else.

He rescued Millie O’Grady from the Indian tribe who held her.  She gradually comes to love James but knows that she cannot stay unless her feelings are returned.

Of course there is an HEA for the two but only after a lot of tension and danger.

Millie has a brother that James also rescues but not without a lot of trouble.  Andy O’Grady loves his sister Millie.  He marries and stays making the O'Grady's the other family in Ransom Canyon.

A nice story that gives the background for the modern stories set in the Ransom Canyon series.  I enjoyed meeting James, Millie and Andy hearing their story and seeing the ties to the present.

I received an ARC of Winter’s Camp from Netgalley in return for an honest review.
Posted by JC Jones at 12:00 PM