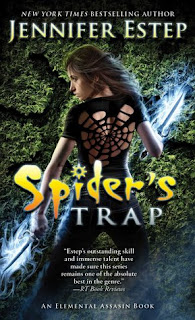 The next thrilling book in Jennifer Estep’s New York Times and USA Today bestselling Elemental Assassin series—“an extraordinary series… One of the most intriguing heroines in the genre” (Romantic Times Book Reviews).

Keep your friends close but your enemies within stabbing distance.

One important lesson I’ve learned in the assassination business is that to be the best you have to roll with the punches. Now that I’m queen of Ashland’s underworld—by default, not by choice—a lot more punches are being thrown my way. But I suppose that’s the price of victory for taking down some of the underworld’s top dogs. Good thing I have my Ice and Stone magic to help me survive my volatile new position. Just when I think things are finally settling down, someone tries to murder me during a hush-hush underworld meeting. But the real surprise is how strangely familiar my shadowy assailant seems to be.

My job is to maintain order among killers, crooks, and thieves, and soon I’m embroiled in a bloody game where the ability to keep secrets could be the greatest superpower of all. My enemies have all sharpened their knives and laid their traps, waiting for me to fall. But this Spider weaves her own webs of death…

Gin has a new job and it is one she does not really want.  That is what she gets for taking down the leaders of the underworld.  Now she is the head.  When some one tries to blow up Philip’s boat with Gin on it she thinks they are after her.  Turns out she is wrong.

Once again the past comes into the present.  This time it is an event from her very early days – one that she has forgotten.  It is not Gin they want but someone else who was there that day.

You can expect a lot of violence in the Elemental Assassin books and Spider’s Trap is no exception.  Once again it looks like Gin will lose but at the last minute she prevails.  Before that happens she almost loses someone that is very important to her.

All of the events in Spider’s Trap work toward Gin accepting that she is the underworld boss.   It also adds a new characters to the series.

There is a big bomb shell at the end.  It seems there are still more secrets that are going to come out.  Danger to Gin and friends is not over by a long shot.  That hint at the end left me ready for the next book in the series.

I received an ARC of Spider’s Trap from Netgalley in return for an honest review.
Posted by JC Jones at 12:00 AM