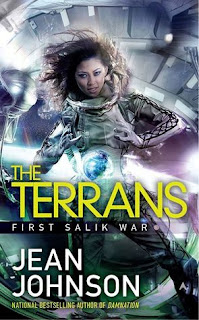 Jean Johnson's first novel in an explosive new science fiction trilogy set in the world of the national bestselling Theirs Not to Reason Why series—set two-hundred years earlier, at the dawn of the First Salik War…

Born into a political family and gifted with psychic abilities, Jacaranda MacKenzie has served as a border-watcher and even spent time as a representative on the United Planets Council. Now she just wants to spend her days in peace and quiet as a translator—but the universe has other plans…

Humans have long known that they would encounter more alien species, and while those with precognitive abilities agree a terrible war is coming, they do not agree on who will save humanity—a psychic soldier or a politician.

But Jackie is both.

After she is pressured into rejoining the Space Force to forestall the impending calamity, Jackie makes an unsettling discovery. Their new enemy, the Salik, seem to be rather familiar with fighting Humans—as if their war against humanity had already begun.

Don’t let the fact that this is a prequel to another series stop you from reading The Terrans.  I read the first book in Theirs Not to Reason Why series several years ago and still have book two on my TBR pile.   The Terrans has no trouble standing on its own.

I loved The Terrans and had a hard time putting it down.  It has all the things that make a great story.

The Salik are wonderful villains who like to eat intelligent living beings.  They have no redeeming features.

The V’Dan are humans who were removed from the home world (Earth) 10,000 years ago.  While they are human there is difference in their appearance and that difference shows that prejudice can live for any reason.

The character development is influenced by that difference.  While the story focuses on the two main characters there are secondary characters that play a big part in the story line.

The book starts with an exciting recue but from there it becomes a story of discovery allowing the reader to see what Earth in the future could look like.  (I think a lot of us would love to have a government that functions like the one in The Terrans.  It would be a great improvement over the politics of today.)

The plot is simple.  The V’Dan are losing the war with the Salik. Now there are new humans who might help turn the tide.  However  just because they are both human does not mean that their differences could not make getting along a big problem.  Both the Terrans and the V’Dan will have their work cut out for them.

This book is set mostly on Earth and ends as they start their journey to the V’Dan home world.  There is a lot more story to tell and I am looking forward to the next book in the series.  It is due out in January of 2016.

ACE published The Terrans by Jean Johnson in 2015.

I received an ARC of The Terrans from Netgally in return for an honest review.
Posted by JC Jones at 12:00 AM