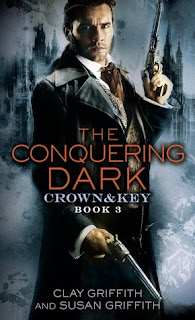 The Crown and Key Society face their most terrifying villain yet: Gaios, a deranged demigod with the power to destroy Britain.

To avenge a centuries-old betrayal, Gaios is hell-bent on summoning the elemental forces of the earth to level London and bury Britain. The Crown and Key Society, a secret league consisting of a magician, an alchemist, and a monster-hunter, is the realm’s only hope—and to stop Gaios, they must gather their full strength and come together as a team, or the world will fall apart.

But Simon Archer, the Crown and Key’s leader and the last living magician-scribe, has lost his powers. As Gaios searches for the Stone of Scone, which will give him destructive dominion over the land, monster-hunter Malcolm MacFarlane, alchemist extraordinaire Kate Anstruther, gadget geek Penny Carter, and Charlotte the werewolf scramble to reconnect Simon to his magic before the world as they know it is left forever in ruins.

Once again Simon Archer and friends must protect Britain from destruction.  Gaios has been at the heart of the danger in the previous books but in The Conquering Dark he takes center stage.  He needs the Stone of Scone and will do anything to get it.  Simon, Kate, Malcolm, Penny, Charlotte and Imogene all must work together to save Britain from the destruction Gaios wants to reign on the land.

As usual this is non-stop action and danger.  Simon needs his magic restored, the Stone must be found and protected and Gaios defeated.  Nothing is easy.  Many are killed.  Much is destroyed but in the end our hero’s prevail.  This time one of their own does not survive and another is not what he has always seemed. For awhile it looks like death and betrayal will end the team?

Like the two previous books The Conquering Dark is action driven.  Take a deep breath before you start.  You will need it as you read.  We do get to know more about each character.  Some of the side characters become more important.  The world building and back story continue.  Surely we have not seen the last of Simon, Kate and friends.

Del Rey published The Conquering Dark by Clay Griffith and Susan Griffith in 2015.

I received an ARC of The Conquering Dark from Netgalley in return for an honest review.