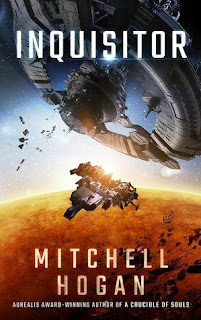 From the Aurealis Award-winning author of A Crucible of Souls.

To Inquisitor Angel Xia, it was just another corporate killing on a backwater planet. But as the bodies begin to pile up and she finds herself a target, she realizes she’s stepped on one toe too many.

Barely escaping attempts on her life by powerful agents with seemingly limitless reach and influence, Angel senses even her co-Inquisitors can’t be trusted. But as the web tightens, she receives a cryptic message from a computer program claiming to be a little girl in desperate need of her help. She insists she’s being held prisoner by a major corporation, but is this just a trap to silence Angel… permanently?

Now a fugitive with her life inextricably linked to the girl in the program, Angel is taken to extremes she never knew she was capable of, and to forgotten places at the edges of known space that hold the darkest secrets of humanity, and the greatest threat to its future.

Inquisitor is an interesting take on an AI.  Charlotte looks like a young girl but she is the aviator for a very powerful artificial intelligence.  When Angel Xia saves she finds herself in a whole lot of danger.

Many things are not as they seem and the longer Angel and Charlotte are on the run the more secrets they discover.  I liked the story and how the plot developed.  The back story and the world building are tied in nicely.  I did wish that the book had been more carefully edited. There were sentences that just did not make sense no matter how many time I read them.  I don’t think  this was an ARC as the book has been out for some time.

While there seems to be an end to story there Angel gets a gift at the end that makes me think Inquisitor is book one in a series.

I received a copy of Inquisitor from Netgalley in return for an honest review.
Posted by JC Jones at 12:00 AM