Jocelyn Dunkirk is not your typical Victorian lady. She dresses in leather, wears goggles and is not afraid to get a little grease under her fingernails. Gentlemen avoid her like a dirty rivet.

Richard Windsor, the Prince of Wales, travels through time to claim Jocelyn's heart, but if it isn't one challenge, it's another. He determines to be a constant, steady presence in her life, hoping to prove he'd make a worthy husband.

Jocelyn's facing a bucket full of problems. The Prime Minister wants her to assist in ending a coal strike before it cripples the nation while her father attempts to recover from a serious injury. Will Jocelyn's dedication to her country and family ruin the one chance she has at love?

She swatted her hand next to her head like she was swatting a fly. Love could flitter away from her heart like a hummingbird for all she cared. Who needed it? Love hurt.

A knock rapped on the door, but before she could voice a reply, Richard walked in. He crossed the room, raw concern splayed over his face and he knelt before her. "What's wrong?"

"A lady never cusses," she replied.

His lips tipped in amusement. "What else does a lady never do?"

He pulled up a chair and sat in front of her. "I believe that."

"And a lady never lies," she said.

He slid his hand over hers and laced their fingers together. A sweet jolt pulsed up her arm and she smiled despite herself.

"So what's bothering you?" he asked.

A Lady Never Lies has a great cast of characters. While Jocelyn Dunkirk is born in Victorian times she is a better fit for modern life. Her Father has allowed her more freedom than most of the women in her time and men find her just a little intimidating. Not the case for Richard Windson. He is a time traveler from the present and he is really taken with her. This is book three in the series and it is Richard and Jocelyn's story. Look for problems, the loss of a important character and the set up for the next story. This is book three in the series. I have not read book one and two and I strongly recommend that you read them first. I was a little lost throughout the entire book. There are hints about backstory but I never really got a good handle on all of the important characters or the change in history that made Richard Windsor the heir to the British Throne. I will be going back to see what I missed in the first two book as I really want to read book four. 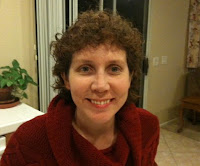 Author Bio: Stephanie Burkhart is a 911 dispatcher for LAPD.  She was born and raised in Manchester, New Hampshire.  After serving 11 years in the US Army she currently calls Castaic, California her home. Stephanie was married in Denmark in 1991 and has two young sons. She adores chocolate, is addicted to coffee and enjoys early morning walks.  She's also an assistant den leader for her son's Cub Scout den and is a Boy Scout mom. She writes paranormal, contemporary, and steampunk romance and has two children's books published with 4RV Publishing.

Stephanie will be awarding a $10 Amazon or B/N GC to a randomly drawn winner via rafflecopter during the tour.