Beyond Jerusalem by Yvonne Crowe - Book Blast and Giveaway

Beyond Jerusalem
by Yvonne Crowe

Nicolina Fabiani and David Baron team up once again to save Jerusalem from itself.

Now David is faced with an impossible choice.
Duty on the one hand, love on the other.
What choice will he make?

In the Eternal struggle for Palestine, David wages war, and Lina the journalist, covers it.

With his arms and legs secured to a metal chair, he was at the mercy of his captors and they were not in a benign mood.

A soldier on either side, dressed in army fatigues untied him, then dragged him down a flight of stairs and along a long narrow tunnel.

Into a corridor painted green with low iron doors on either side. Solid bolts securing them shut. 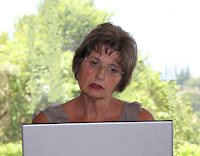 I am a successful writer who enjoys writing provocative mystery/thriller novels including the popular Nicolina Fabiani series.

When I am not living out little princesses' fantasies and puzzling over teenage boys' take on life I create fantasies for adults, armed with nothing more than an active imagination, a great deal of research and a burning interest in other people's cultures and their countries

Living in New Zealand, which is about as far away from the world's hubs as one can get, I love travelling to places to find ideas and characters for my novels.

Please open your minds and hearts to events we don't understand and are currently overwhelming us. Check out my latest topical novel: BEYOND JERUSALEM http://amzn.to/2u9Q0uu

HELP SOMEONE WITH CANCER. Check out my story of how I beat this dreadful disease which kills hundreds of thousands of women worldwide every year:  http://amzn.to/2yJdAlg

I had a run in with Stage 4 breast cancer, but chose to treat this successfully with a natural therapy. No surgery and no chemotherapy. I have been cancer free now for five years.

Yvonne will be awarding a $20 Amazon or B/N GC to a randomly drawn winner via rafflecopter during the tour.

I enjoyed getting to know your book; Congrats on the tour and thanks for the chance to win :)

I would love to read your book.

Good to have you here today