How do you get a nuke into the heart of the city? Maybe a dolphin can help. From Author John Waite, the tale of a police detective who matches wits with a mad scientist and terrorists intent on destroying America. When detective Hickory Logan joins Park Ranger Kevin Whitehead investigating the mysterious death of a dolphin she finds herself sucked into a far deeper whirlpool. Can she and Kevin stop the tide of terror that threatens to kill thousands or will they be fodder for a nuclear fireball?

A newspaper review described Tursiops thus: "The writing is, well, wonderful. Waite has a gift for dialogue and story-telling, and his plot is adventurous and perfectly paced. "

A scrabbling behind him took Red’s attention from the house. He turned to see a young man wearing medic bars leaning over Jessie’s prone body. He watched as the medic fingered Jessie’s throat, looking for a pulse.

He reached into a small canvas bag and pulled out a red-lensed flashlight, a plastic bag and tubing. Squatting next to Jesse, he shoved her sleeve up her arm and inserted a needle into a vein.

He looked up at Red.

“Close as you’re gonna get out here.”

“I’m going for a medevac,” he said and vanished into the darkness.

Red watched Jessie. She didn’t move.  He couldn’t tell if she was  breathing. But the medic had said she was alive.

Headlights flipped on, and an engine cranked several vehicles back in the convoy. Other lights were coming on around him now, and he could see Jessie, her face masked by the blood-soaked bandanna stuffed into the bullet furrow.

“Jess, I don’t know. Just don’t move…please. The medic will be right back.”

“I screwed up, huh. Anybody else hurt?”

As if on cue, a jeep crunched to a halt at Jessie’s feet, and the young medic jumped out.

“Bird’s on its way,” he said as he knelt beside her.

The medic took her hand.

I grew up in the suburbs of a big city. Not just any city. At the time I didn’t realize that New Orleans was unique. But even back in the 50s and 60s its nature leaked across the municipal boundaries and gave daily life a pungent flavor. That aspect of it began to dawn on me when I started college, which was only an hour’s drive from Canal Street. But it might as well have been in another state and another time zone.

Even as a kid I could walk anywhere in Kenner, our suburb, and not feet threatened. Of course, I knew I could run fast and duck if I ran into a dangerous situation. But I never had to utilize that particular talent.

That freedom sweetened life for me beyond the emotional bounds that many residents of other big cities enjoy.

I imagine there were drug and prostitution problems there even then, but nothing like the street corner dealers and sex trade that exists today. Back then the cops were good guys, even when they weren’t.

And there wasn’t the now omnipresent social media and on-the-spot television available to criticize every misstep a well-known figure made.

None of that directly affects the heroesand heroines who people my stories. But I think that social gumbo enabled me to understand how such characters fit into their environment. And how what they do affects that environment. It lends flavor to how those characters interact.

Being able to see in my mind’s eye those characters affected by their environment helps me to tell their stories. 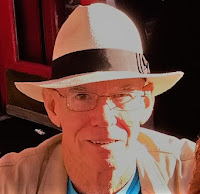 Thousands of author John C Waite’s words flew past Alpha Centauri years ago,  heading for the center of the galaxy, perhaps sparking an arthropod’s grin in route. Waite, a degreed journalist and retired Merchant Mariner has numerous writing and broadcasting awards to his credit, and millions of words in print and broadcast media. Originally from New Orleans he has called Panhandle Florida his home for fifty years, but still retains a taste for things Creole and Cajun. A recreational and professional sailor, his travels have covered the Caribbean, the Atlantic and Pacific coasts, portions of south and Central America, Canada, Hawaii, Ireland, Britain, and Europe. John resides in Pensacola, Florida. He is a father to four, and grandfather to four.  His books are available on Amazon.

John C. Waite will be awarding a $50 Gift Certificate to Nuts.com to a randomly drawn winner via rafflecopter during the tour.

a Rafflecopter giveaway
Posted by JC Jones at 2:30 AM

Thanks for hosting, and if readers have questions I can always be reached at johngllgskns@gmail.com.