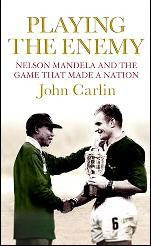 I went to the movie last week to see Invictus. I thought it was a great movie and would recommend it to anyone. I found that I could not get the story out of my mind and decided that I needed to read Playing the Enemy, the book the movie was based on. I wanted to know if the movie version was true to life. I found that there was some creative license but the entire movie did a very good job of portraying events as they actually occurred.


John Carlin covered events in South Africa until 1995 and had followed Nelson Mandella over the years. Although much has been written about that time he felt that the 1995 World Cup was a pivotal point in South Africa history. He wanted to write a book describing the events surrounding the World Cup. He approached Mandella to see if he was willing to be intervened and found him more than willing, as were others who played a role in the drama surrounding the World Cup.

Carlin describes the factors that lead Mandella on the path of reconciliation instead of revenge. Carlin shows that Mandella was, “a canny strategist, a talented manipulator of mass sentiment. His gift for political theater was as sophisticated as Bill Clinton’s or Ronald Reagan’s.” Mandella knew he had to find a way to bring the people together and he decided to use the 1995 World Cup. The 1995 matches were held in South Africa. Rugby was the white man’s game and the blacks saw the Springboks as symbol of white oppression. For the whites rugby was like a religion and the Springboks were the high priests. Mandella felt he could build a bridge to the white community by supporting the team. Playing the Enemy details how blacks and whites all came together. Carlin includes excerpts from interview with many of the key players. He also includes exact quotes from media sources.

I would recommend seeing the movie and then reading the book. There are some lessons relevant to today to be learned from both.

Penguin Press published Playing the Enemy , Nelson Mandella and the Game that Made a Nation by John Carlin in 2008.

I purchased Playing the Enemy from Fictionwise.
Posted by JC Jones at 4:07 AM