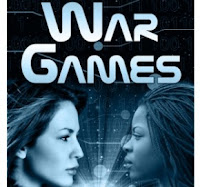 Science Fiction Romance/Space Opera
In her recent newsletter K S Augustin offered a free copy of War Games to anyone who would post a review (either good or bad) after reading the book.  I am a K S Augustin fan and have purchased many of her stories so I asked for a copy.   That said I knew War Games was a female/female romance.  That is not my sexual preference so I wondered how I would react to that element of the story.  While I don’t understand the attraction it did not change how I reacted to the story.
Cheloi Sie is not who she seems.  She has been deep undercover in the Empire for years.  She is near the end of her mission when her troubles double.  Her second in command is out for her job.  There is an immediate attraction between Cheloi and her new assistant, Lith Yinalna.  Lith has her own problems.  She is attracted to the woman she has been sent to kill.  The story moves at a fast pace from there.   Like all K S Augustin stories the romance does not detract but is woven in as part of the story. War Games is a good story but it is not one of my favorite K S Augustin stories.  My two favorite stories are In Enemy Hands and On Bliss.  I have a post recommending In Enemy Hands.
A the preview of Quinten’s Story to be released in December of 2011 was included at the back of the book.  The story looks great and I am looking forward to adding it to my K S Augustin collection.
Sandal Press published War Games by K S Augustin in 2011.
Posted by JC Jones at 1:57 AM