As the Pig Turns, An Agatha Raisin Mystery by M.C. Beaton 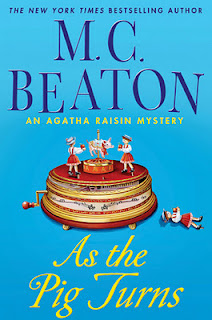 Agatha is at it again in As the Pig Turns.  While stopped in traffic she takes her hands off of the wheel to wipe her nose and is ticketed by a policeman out to make his monthly quota.  The next day he gives her another ticket for going 2 miles over the speed limit.  Agatha blows off some steam in the local pub saying he should be roasted like a pig.  So guess what?  Someone killed him and tried to roast him just as Agatha said should happen.

Agatha wants to walk away from this murder but is hired by the policeman's ex-wife to solve the crime.  She can't turn down the money so she takes the case.  Much mayhem follows.

There is a cute scene at the first of the book that is not a spoiler.  Agatha helps the local vicar (who cannot stand Agatha) solve a problem.  I loved it when Agatha asked if she could call him Alf and he said no definitely not.

This is one book where Agatha does not spend a lot of time obsessing about a man.  Charles and James are both in the story but she seems to have lost interest in both.  However, after all is solved a new man shows up.  I will have to wait to see if he is still around when the next book comes out.

Minotaur Books published As the Pig Turns by M.C. Beaton in 2011.