the end of ordinary by Edward Ashton - Book Tour and Giveaway

The End of Ordinary
by Edward Ashton


My guest today is Edward Ashton author of The End of Ordinary.  Be sure to check out his post on world building.

Drew Bergen is an Engineer. He builds living things, one gene at a time. He's also kind of a doofus. Six years after the Stupid War -- a bloody, inconclusive clash between the Engineered and the UnAltered -- that's a dangerous combination. Hannah is Drew's greatest project, modified in utero to be just a bit better at running than most humans. She’s also his daughter. Her plan for high school is simple: lay low and run fast. Unfortunately for Hannah, her cross-country team has other plans.

Jordan is just an ordinary Homo-Sap. But don’t let that fool you -- he’s also one of the richest kids at Briarwood, and even though there isn’t a single part of him that’s been engineered, someone has it out for him.

Drew thinks he’s working to develop a spiffy new strain of corn, but Hannah and her classmates disagree. They think he's cooking up the end of the world. When one of Drew's team members disappears, he begins to suspect that they might be right. Soon they're all in far over their heads, with corporate goons and government operatives hunting them, and millions of lives in the balance.

“Huh,” I said. “I see where you’re going with that, but I was actually hoping you’d have some kind of last-minute escape plan to present now.”

“Yeah. If this were a vid, this is where you’d suggest a super-complicated scheme to get out of here. I’d say ‘that’s crazy!’ and you’d say ‘do we have a choice?’ and then we’d do it and it would work somehow and you would totally be my hero.”

I looked down at the lantern, and found myself wondering if the battery would give out before we did. A shiver ran from the base of my spine to the back of my neck and down again.

“Are you really gonna eat me?”

I stared at him.

I dropped my head into my hands.

I stood up, and picked up the lantern.

Whenever I begin reading a new piece of fiction, there are two questions that I really prefer to have answered as quickly as possible:

Few things are more frustrating than getting half-way through the first chapter of a book and still having no idea whether you’re in the future or the past, on Earth or some alien world. Answering these questions seems like a pretty basic requirement for an author, but getting it done in an unobtrusive and effective way is surprisingly difficult.
Establishing setting is important in all literature, of course, but it’s a bit easier when you’re writing contemporary fiction. Put a view of the Empire State Building in the background and throw in an Eddie Vedder reference, and you’ve let everybody know more or less where and when your story is taking place. World building in science fiction is a much trickier process, carried out in two distinct stages.
Before an author can effectively convey the setting to her readers, she has to have a complete understanding of it herself. This is Stage One. If, for example, you’ve never been to New York City, and you weren’t alive in 1992, you might want to reconsider using the signifiers I mentioned above.
In science fiction, of course, the need for personal experience with the setting is much less urgent. If your rom-com is set in New York in 2092 rather than 1992, you can get away with not knowing contemporary details of the urban landscape, because things may have changed in the interim. You still need to have a clear understanding of what those changes are yourself, though. The Empire State Building has been replaced by the Carrot King’s new palace? That’s okay—but you’d better have a solid picture in your head of what the Orange House looks like, how it was constructed, how the landscape around it has changed to accommodate the new structure, etc.
Oh, and by the way, what’s the structure of our new carrot-based government? Is it a strict monarchy, or does the Carrot King defer to a bicameral legislature? How has society’s structure changed? Are vegans now hunted pariahs? These details will impact your plot, and you need to know them before you start writing.
It’s possible, of course, to take this stage of the process too far. You don’t need to invent a grammatically complete language for the carrots, or write a carrot-based Silmarillion to explain the last five thousand years of carrot civilization. Do, though, make sure you understand the broad outlines. If the Carrot King has a court of nobles in Chapter 1, then gets impeached by congress in Chapter 12, someone is going to notice.
Once Carrotopia is fully fleshed out in your skull, you need to convey enough information about its appearance, mores, and history to your reader to allow him to fully appreciate all that pre-thinking you did. This is Stage Two, and it’s a tricky one. It’s very tempting to start a science fiction story with a lengthy description of the world you’ve created. Please, please do not do this. It’s boring, and very much the mark of an amateur. Don’t think you can hide your info dump in dialog, either. Starting a book with a conversation between two characters about details of their society that both of them would obviously know and have no reason to discuss with one another is another absolute show-stopper.
So, how do you go about getting your reader oriented without boring him to tears? Well, for some masterful examples, check out Startide Rising, by David Brin, A Deepness in the Sky, by Vernor Vinge, or Ancillary Justice, by Ann Leckie. All these books are set far in the future and far from Earth, and all manage to convey their settings effectively while also yanking the reader into the story by his lapels. In general, though, there are a few simple techniques that you can use to get this done:

•     Convey setting through action. This should be your go-to method in almost every case. If your story opens with your protagonist racing along the waterfront, Statue of Liberty in the distance, pursued by carrot stormtroopers, you’ve gone a long way toward letting your reader know where he is.
•     Convey setting through dialog. Wait, didn’t I just say not to do this? Yes. Yes I did. However, this is in fact a tool in the bag. You just need to use it sparingly, and with caution. It’s okay for one character to explain some important detail about carrot society to another as long as (1) the second character would have no way of knowing this detail (for example, because he is extremely dumb) and (2) the explanation of this detail is organic to the action (for example, because the second character is about to eat a salad.)
•     Convey setting through exposition. Included here for the sake of completeness, but this is the break-glass-only-for-emergency option. Neal Stevenson can get away with this. You probably can’t.

A big part of the reason that writing science fiction is so much fun is that, as an author, you get to flat-out make stuff up. With great power comes great responsibility, though, and it’s important to remember that you have a solemn obligation not to leave your reader either bored or bewildered. It’s a fine line to walk, but if you can pull it off, the rewards are endless.
I mean that metaphorically, of course. The financial rewards for a science fiction writer have a very limited and well-defined end.
Still a lot of fun, though.

Edward Ashton lives with his adorably mopey dog, his inordinately patient wife, and a steadily diminishing number of daughters in Rochester, New York, where he studies new cancer therapies by day, and writes about the awful things his research may lead to by night. He is the author of Three Days in April, as well as several dozen short stories which have appeared in venues ranging from the newsletter of an Italian sausage company to Louisiana Literature and Escape Pod. 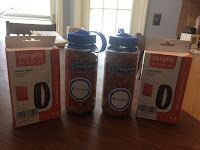 Edward will be awarding a 14 Ounce Nalgene—filled with candy corn! & 1 VeryFit Smart Band (US only) to a randomly drawn winner via rafflecopter during the tour.

Thanks so much for hosting me today.

I enjoyed hearing your take on world building