Leave a comment for a chance to win a copy of It's Getting Scot in Here.  Contest closes on 2/28. 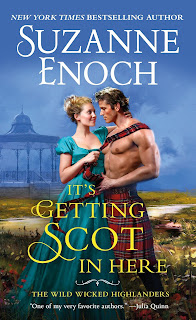 HAPPILY-EVER-AFTER
London socialite Amelia-Rose Baxter is nobody’s fool. Her parents may want her to catch a title, but she will never change who she is for the promise of marriage. Her husband will be a man who can appreciate her sharp mind as well as her body. A sophisticated man who loves life in London. A man who considers her his equal—and won’t try to tame her wild heart...
IN THE HIGHLANDS
Rough, rugged Highlander Niall MacTaggert and his brothers know the rules: the eldest must marry or lose the ancestral estate, period. But Niall’s eldest brother just isn’t interested in the lady his mother selected. Is it because Amelia-Rose is just too. . . Free-spirited? Yes. Brazen? Aye. Surely Niall can find a way to soften up the whip-smart lass and make her the perfect match for his brother for the sake of the family.
JUST GOT A WHOLE LOT HOTTER.
Instead it’s Niall who tempts Amelia-Rose, despite her reservations about barbarian Highlanders. Niall finds the lass nigh irresistible as well, but he won’t make the mistake his father did in marrying an Englishwoman who doesn’t like the Highlands. Does he have what it takes to win her heart? There is only one way to find out...

Once upon a time – in May 1785, to be exact – Angus MacTaggert, Earl Aldriss, traveled from the middle of the Scottish highlands to London in search of a wealthy bride to save his well-loved but crumbling estate.  Aldriss Park had been in the MacTaggert Family since the time of Henry VII, when Domhnall MacTaggert, despite being Catholic and married, declared publicly that Henry should be able to wed as many lasses as he wanted until one of them got him a son.  Aldriss Park was the newly minted earl’s reward for his support and understanding.

For the next two hundred years Aldriss thrived, until the weight of poor harvests, the every-intruding, rule-making Sassenach, and the MacTaggets’ one fondness for drinking, gambling and wild investments (including an early bicycle design where in the driver sat between two wheels; sadly it had no braking mechanism and after a series of accidents nearly began a war within g\the MacTaggets’ clan Ross) began to sink it into disrepair.


When Amelia-Rose Baxter and Niall MacTaggert met I was sure I knew where this story was going and how it would get there. Well it seemed to get there half way through the book and then it took a sharp left turn. After that it took another turn and then another before Amelia and Niall finally get their HEA. An interesting and convoluted plot with two likable characters that kept me reading. A great start to a new series.

A lifelong lover of books, Suzanne Enoch has been writing them since she learned to read. She is the author of two well-received traditional Regencies, 24 and counting England-set Historical Romances, four contemporary Romantic Suspense novels, and a growing number of Scottish Highlands Historical Romances including the October 2016 release of HERO IN THE HIGHLANDS (Book One in the No Ordinary Hero trilogy).

A native and current resident of Southern California, Suzanne lives with a green parakeet named Kermit, some very chirpy finches, and a small army of Star Wars figures (including a life-size Yoda). Her books regularly appear on the New York Times and USA Today bestseller lists, and when she's not busily working on her next book or staging fights with action figures, she likes to read, play video games, and go to the movies with her large and supportive village.
Posted by JC Jones at 12:00 AM