Branded by Fire by Nalini Singh 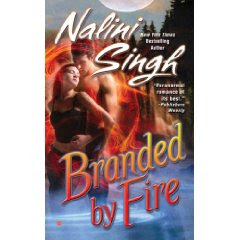 Branded by Fire is the 6th novel in the Psy/Changeling series. While any of the novels can be read as a stand-along the books are better read in order. There are also 2 novellas published in anthologies that can go anywhere in the series.

Branded by Fire is Riley and Mercy’s story. Both are strong characters that have never found a mate. They are from different changelings groups and while sparks have flown anytime they are together it has been antagonism not romance that caused the tension. When the true nature of their attraction strikes they both have to face issues that will affect their entire lives. Add another political crisis and you have a fact moving story with danger and romance. The Psy/Changeling world just keeps getting better. Branded by Fire adds to the political and social world Nalini Singh has created and sets the stage for further stories.

Branded by Fire by Nalini Singh was published by Berkley Books in 2009.

*This novella was written to stand alone so you can pick it up at any stage in the series.
Posted by JC Jones at 6:52 AM