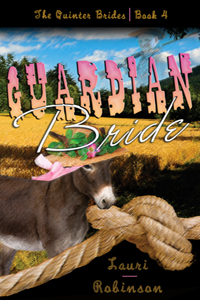 Historical Romance
The Quinter Bride series is one of my favorites and Guardian Bride, the next book in the series, has just been published.   This time it is Snake’s story but before he is married at gunpoint he is shot and not by Ma.  All of this is happening because he sat in on a poker game in Dodge, a stupid poker game, where he threw in the winning hand because July Austin had thrown his daughter, Summer, into the pot.  Snake did not think it was right to win a person.  That should have been the end of it but of course it was not.  When Snake threw that hand in he caused complications.
Guardian Bride has a touch of the paranormal, hidden danger, a really bad bad man, a great part for one of my favorite characters, Buffalo Killer, some great new characters and of course romance.  Lauri Robinson has given each of the Quinter Bride’s a unique wedding and Snake and Summer’s wedding is no exception.  Now there is only one Quinter brother left without a bride.  I think I may have seen a hint of foreshadowing about Bug's bride in the Guardian Bride.  I will have to wait for Wild Cat Bride due out in April to see if I am right.
Want to know more!!  Lauri will be here tomorrow for an interview.  Among other things find out what I spotted on a trip down Interstate 70.
Wild Rose Press published Guardian Bride by Lauri Robinson in 2010.
I purchased Guardian Bride as an ebook from Fictionwise.
Posted by JC Jones at 4:31 AM