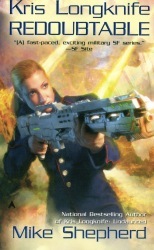 Military Science Fiction
Kris is back for her eighth book and the she is still a trouble magnet.  On the rim looking for pirates Kris and her crew end up in freeing a planet full of starving people.  It would not be a problem if the planet were not in Peterwald space.  As a result Kris is again meeting and joining forces with her new BBF, Vicky Peterwald.  The Iteeche problem from Undaunted, book seven, is still around but it looks like Daring, book nine, due out in November of 2011 will be the one to deal with that problem.
Full of danger, trouble and adventure Redoubtable is a good addition to the Kris Longknife series.  Look for more of the same in the future.
ACE published Kris Longknife: Redoubtable by Mike Shepherd in 2010.
I purchased Kris Longknife: Redoubtable from Borders.
Posted by JC Jones at 4:44 AM