A Burial at Sea by Charles Finch 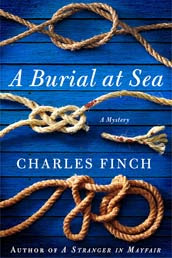 Historical Mystery
A Burial At Sea is set in 1873.  This is a time of great tension between France and England and war is a possibility.  Both England and France have spies everywhere.  Somewhere England has a leak and several of their spies in France have been found dead.  Charles Lenox, a former detective and now a Member of Parliament, is sent on a secret mission to visit the newly dug Suez Canal to meet with a French official who has information about the leak.  He sails on the Lucy and when one of the crew is found murdered he is asked to use his skills to find the killer.  He must balance his two missions; one as a diplomat and the other as a detective.
A Burial at Sea is the fifth book in the Charles Lenox mystery series and is the first one I have read.  I never felt lost.  The characters and the story have no trouble as a stand-alone.


I like history and enjoyed how Charles Finch used facts from the period to add to and develop the story.  It was fascinating to read about life aboard a ship that is part sail and part steam.  The book brought that part of history to life.   If you are like me and enjoy historical mysteries I think this would be a good series to read.
Minotaur Books published A Burial at Sea by Charles Finch in 2011.
I received an ARC of A Burial at Sea from Amazon Vine. I like the book and will go back and read the first books in the series.
Posted by JC Jones at 2:58 AM