The Hardest Thing to Do by Penelope Wilcock 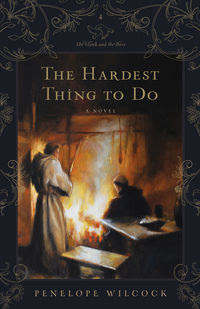 Christian Historical Fiction
I received The Hardest Thing to Do from Amazon Vine and I really did not know what type of book I was receiving; for some reason I thought the book was a historical mystery.  It is historical but it is not a mystery.  This is the fourth book set in the world of The Hawk and The Dove.  As I had not read the first three I was often confused when I started the book.  There is a large cast of characters and while the author provides a guide assumes that the reader has read the first three books.  As a result it took me awhile to get into the story.
I did enjoy the story.  It is set in a medieval monastery in England.  Father John has just returned as Abbot of the monastery when an old adversary comes asking to join.  Prior William has never been popular and now his priory has been burned to the ground and he has no place else to go.  This is a story of love and forgiveness told over the forty-five days of Lent.
It was interesting following the flow of a monk’s day.  I do wonder if it was as calm, serene, and spiritual an existence as depicted in the book.
The next book in the series is The Hour Before Dawn and is due out in January of 2012.
Crossway published The Hardest Thing To Do by Penelope Wilcock in 2011.
Posted by JC Jones at 1:51 AM

Email ThisBlogThis!Share to TwitterShare to FacebookShare to Pinterest
Labels: Father John, Medieval England, Medieval Monasteries, Prior William, The Hawk and The Dove