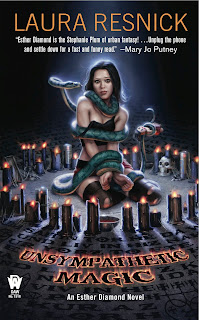 Paranormal Mystery/Romance
Poor Esther, even when she gets a good role something bad happens.  While she is playing a hooker on The Dirty Thirty TV show zombies, angry spirits and a voodoo curse threaten everything.  Enter Esther’s sometime boyfriend Connor Lopez, a New York City detective and Dr. Maximilian Zadok , a 350 year old sorcerer whose day job is to protect New York City.  Again this is a set up for disaster.  Connor does not believe in magic and Esther is right in the middle of a plot full of good and bad magic.  Will these two ever get together?
This is the third book in the Esther Diamond series.  I found it to be slow going at first but once the pace picked up it was filled with fun and humor.  Unsympathetic Magic can be read as a stand-alone but I recommend starting with the first book.  The other two books in the series are Disappearing Nightly and Doppelgangster.
Unsympathetic Magic was my Tuesday Teaser several weeks ago.  You can look back and read the quote.
DAW Books published Unsympathetic Magic by Laura Resnick in 2010.
Posted by JC Jones at 2:01 AM