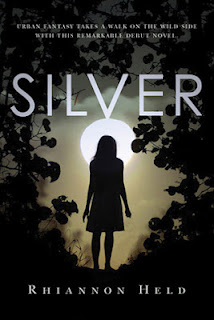 Just some background.  I received a advance uncorrected proof (ARC) of Silver from Amazon Vine.  This is the first published novel by Rhiannon Held.  After reading Silver I assume that it is the first in the world Rhiannon has built.

"Andrew Dare is a werewolf. He’s the enforcer for the Roanoke pack, and responsible for capturing or killing any Were intruders in Roanoke’s territory. But the lone Were he’s tracking doesn’t smell or act like anyone he’s ever encountered. And when he catches her, it doesn’t get any better. She’s beautiful, she’s crazy, and someone has tortured her by injecting silver into her veins. She says her name is Silver, and that she’s lost her wild self and can’t shift any more.

The packs in North America have a live-and-let-live attitude, and try not to overlap with each other. But Silver represents a terrible threat to every Were on the continent.

Andrew and Silver will join forces to track down this menace while discovering their own power and their passion for each other."

My take on the novel:

Worldbuilding:  This is a totally different take on werewolves and how a pack functions.  There was a lot to get in and it is handled beautifully.  Mixed into the story line there is a hint here and a hint there.  It never intrudes on the story but is an interregnal part of the story line.

Backstory:  There is a lot of backstory in the book.  Like the worldbuilding it is dropped in without intruding.  There will be hint in the middle of some dialog, a little mixed into the action and it all builds until you know the entire story.  In some instances that does not happen until the end of the book.  There were so many hints about past action that I did stop to see if I had started a book in the middle of the series.

Characters:  Both main characters were well developed.  Silver a little less than Andrew but most of that was because Andrew’s background was more complex.  There was not skimping on developing the side character either.  Even some who were only several phone conversations had depth and substance.

Plot:  Very involved.  Everything was interwoven into the plot.  Backstory, worldbuilding, characters were all interrogated into the story line. Everything moved along seamlessly without the awkward sections you sometimes find in books.

Writing:  With everything else I have mention you have to know the book is very well written.  Rhiannon has her own unique voice and it comes across in Silver.

Tor will release Silver by Rhiannon Held in June of 2012.

This looks worth checking out. Thanks for the tip. :-)