Imposters of Patriotism by Ted Richardson 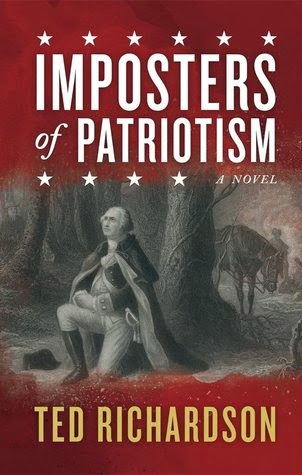 Savannah, Georgia antiques store owner Matt Hawkins discovers a two-hundred-year-old journal containing a stunning accusation. The journal claims that America's most revered hero, George Washington, wrote a secret surrender letter to the British during the Revolutionary War-a seditious act that would have ended America's fight for independence. Meanwhile, the present-day race for president of the United States is a dead heat. The Republican nominee, a direct descendant of Washington's family, has shamelessly exploited his ties to the Founding Father-a strategy that has worked brilliantly to eliminate a once wide gap in the polls. As the past collides with the present, Hawkins and lovely historian Sarah Gordon are determined to unearth the truth about the journal's remarkable claim. But they must avoid a shadowy adversary who has a billion dollars riding on the election's outcome-and who will stop at nothing to ensure that Washington's surrender letter remains a secret. Ted Richardson's debut novel can perhaps best be described as historical fiction wrapped inside a modern-day mystery. Richardson ingeniously blends actual historical events with innovative mystery to create a fast-moving, well-plotted tale of suspense.

Imposters of Patriotism is pretty predictable but still a fun easy book to read. It is set in the present but does flashbacks to the past.  Those flashbacks set up the story line.  I found a lot of the action a bit over the top but it did keep me reading.  There is enough tension and danger to hold interest and just for fun there is a little romance.

The present day characters were well-developed and fit the story like a glove. The plot was developed in a way that fit the actual actions of the historical characters showing that the author did quite a bit of research when writing the book.  All of that made the book more interesting.

The author included notes in the back of the book that tell real from fiction.  While the main thrust of the story is a fictional document I was surprised by how much of the setting was real.  The big surprise was how many of the places and organizations were also real. Now I want to go back and see some of the places mentioned in the book.

I received an ARC of Imposters of Patriotism from Netgalley in return for an honest review.
Posted by JC Jones at 12:00 AM