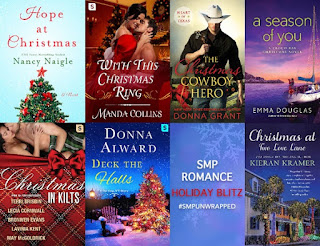 Be sure to check out the other books on the tour:

Deck the Halls
by
Donna Alward

With shades of It’s a Wonderful Life, one man must face his past to find his future this Christmas.

In the last year, George's life has drastically changed. The formerly homeless veteran now has a job he likes, a family in the residents of Darling, VT, and for the first time in years, a home. But while his present is good, he's still haunted by the past, a past that appears shortly before Christmas when the older sister of his brother-in-arms hunts him down and finds him in Darling, working at the Ladybug Garden Center.

Amy’s looking for closure for her family after her brother's death in the Middle East, but the serious man she finds working in Vermont doesn’t resemble the soldier she remembers from years before. This man is hardened and yet somehow fragile, too, and in her desire to find out what really happened to her brother, she learns more about George than she ever expected.

With a little Christmas magic and the whole town supporting them, can these two bruised hearts make a future together?

I want to give three cheers to Donna Alward for telling George's story. He is older, was homeless, and has never forgiven himself for the death of his best friend in Iraq. He has been a side character in the first Darling, VT stories and started on the road to recovery when he takes a job sweeping up and watering plants at the Ladybug Garden Center. Now he is full time, has an apartment and even owns a truck. He is thrown back in time when Amy, the older sister of his brother-in-arms, finds him just before Christmas. She wants to know about her brother's last days but realizes that she must take it easy and give George the space he needs before he can tell his story. George is not your usual main characters and his story does not follow the usual path to an HEA. Instead George finds a path to accepting that he was not the cause of his friends death and he and Amy are looking forward not back. Both decide to see what happens as they celebrate Christmas with Amy's family.

A busy wife and mother of three (two daughters plus the family dog), Donna Alward believes hers is the best job in the world: a combination of stay-at-home mom and romance novelist. Donna loves being back on the East Coast of Canada after nearly twelve years in Alberta where her romance career began, writing about cowboys and the west. She is the author of Somebody Like You, Somebody's Baby, and Someone to Love.