Of The Divine by Amelia Atwater-Rhodes - Virtual BookTour and Giveaway

Of The Divine
by Amelia Atwater-Rhodes 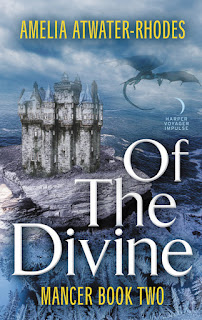 Henna is one of the most powerful sorcerers in the Order of Napthol, and her runes ’s runes tell her that the future of Kavet is balanced on the edge of the knife. The treaties between Kavet and the dragon-like race known as the Osei have become intolerable. The time has come for the royal house to magically challenge Osei dominion. Prince Verte, Henna' lover, is to serve as the nexus for the powerful but dangerous spell, with Naples--an untested young sorcerer from the Order of Napthol--a volatile but critical support to its creation.

Amid these plans, Dahlia Indathrone’s arrival in the city shouldn’t matter. She has no magic and no royal lineage, and yet, Henna immediately knows Dahlia is important. She just can’t see why.

As their lives intertwine, the four will learn that they are pawns in a larger game, one played by the forces of the Abyss and of the Numen—the infernal and the divine.

A game no mortal can ever hope to win.

I asked Amelia Where are five places you might visit for inspiration for your books?  Here are her answers.

I wish I had more opportunities for travel, because there are always places I’ve wanted to go to help inspire and research books, but I can describe places I have gone in the past and places I hope to go.

Some of my research was done close to home:  Kavet, the country where the Mancer Trilogy takes place, is roughly analogous to the coastal areas of Maine in terms of climate, and the structure of the capital city is inspired by 18th century Salem, Massachusetts. As part of research, I’ve enjoyed visiting the Salem wharf district, and the historical sites that are focused on the port-city’s maritime history (instead of just witches).

Other research has been based on trips I’ve gone further afield, the most notable being a hike on a glacier in Alaska. I didn’t go to Alaska specifically to do research-- I was visiting a friend-- but said friend is also an active writer, and I’m sure she understands that much of Ice House (a novel I’m considering for publication after the Mancer trilogy ends next year) takes place in the glacial lands known as the Embracing Sea, where brave sailors can gain wealth in exotic trade, but any ship who lingers too long at the end of the season is likely to find itself iced in place for the long winter.

Another fun and inspirational adventure was a trip through the Howe Caverns in New York. At the time I was working on a novel set primarily in a subterranean complex formed from a series of natural caves, which had been initially intended to be part of a resort but had become nearly the last refuge for human beings on the planet (this for a futuristic sci-fi novel I currently call Sororcula). I would love to go back at some point and take the “extended tour” that opened up in 2015.

There are a couple places I would like to revisit before revising Disappearing Isle, a novel that takes place after my last YA novel Promises to Keep. For one, I want to explore a few of the major routes and junctions in Boston, New York and Florida-- the character ends up taking trains from Boston down to Tampa, and if it were remotely practical (it isn’t) I would love to trace his route. More importantly, I would like to spend a bit of time at the campsites on the western coast of Florida, which also play a role in the story. Besides, who doesn’t want an excuse to visit the Gulf side of Florida?

Last but not least, I want to see the Frank Church—River of No Return wilderness area in Idaho. The Salmon River area is more or less where the entire Maeve’ra Trilogy took place, and I would love to see it (and probably see how much I got wrong!). We have forests in Massachusetts, but they’re young forests; most of this area was clearcut not long ago and re-planted more recently. I want to go see the old forests.

Of course, all these are sites I know are inspirational because they have already inspired or been featured in a book. As for the places I would like to go, it’s hard to say. Every new place has the potential to whisper a new story in my ear. That’s why I like to take any opportunity I have to see and do new things.
~~~~~~~~~~~~~

The ocean that covered most of the Numen’s first level was clear and sweet. It lapped against diamond sand where tiny long-legged birds spread wings the color of honey as they raced back and forth, plucking drifting seeds from the air. The Numini—those perfect, beautiful sentinels who ruled the divine realm by might and decree—watched the birds’ antics with gentle amusement.

One Numini looked past the white sands and crystal waters below to a realm where the ocean was cold and tasted of salt, where verdant green cascaded across rich earth, and where the mortal creatures lived.

Soon, she thought. She was one of the three arbiters who ruled the Numen, second only to the high justice of her kind.

“I am concerned about the Abyssi,” remarked one of her brothers, a lesser judge. “We have worked for generations to nurture these lines of power, and now they could all be—”

“Have faith,” she assured him. “Abyssi scrabble at the mortal realm like dogs at a closed door. They always have. They lack the wisdom or discipline to do more than that.”

“But do the mortals have the wisdom to keep the door closed?” he challenged.

“Faith,” the arbiter said again. This time it was a clear chastisement.

She knew their children in the mortal world were defenseless. Humans had minds barely capable of comprehending their own existence, and as a consequence lived short and brutal lives. They needed their divine guardians to guide and nurture them. The Abyssi—vicious, mindless beasts of the infernal realm—could fight for sovereignty all they wanted. In the end, it wouldn’t matter.

In the mortal realm, all things served the divine. 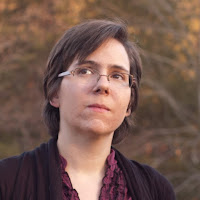 Amelia Atwater-Rhodes wrote her first novel, In the Forests of the Night, when she was 13 years old. Other books in the Den of Shadows series are Demon in My View, Shattered Mirror, Midnight Predator, all ALA Quick Picks for Young Adults. She has also published the five-volume series The Kiesha’ra: Hawksong, a School Library Journal Best Book of the Year and VOYA Best Science Fiction, Fantasy, and Horror List Selection; Snakecharm; Falcondance; Wolfcry; and Wyvernhail.
https://en.wikipedia.org/wiki/Amelia_Atwater-Rhodes
http://www.atwaterrhodes.com/
https://twitter.com/AtwaterRhodes
https://www.facebook.com/DenOfShadows/?ref=br_rs

Amelia Atwater-Rhodes will be awarding a limited edition print copy of the book *U.S. only* to a randomly drawn winner via rafflecopter during the tour.

Visit the other blogs on the tour:

Good to have you here today. I managed to post twice, once with interview once without. both still up and both have interview. enjoyed seeing where you went for inspiration.

scrabble word finder
Appreciate it! This is an great site!