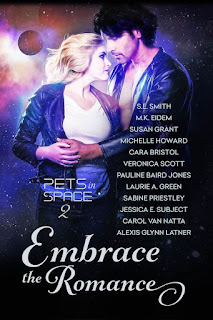 Embrace the Romance: Pets in Space 2

The pets are back! Embrace the Romance: Pets in Space 2, featuring twelve of today’s leading Science Fiction Romance authors brings you a dozen original stories written just for you! Join in the fun, from the Dragon Lords of Valdier to a trip aboard award-winning author, Veronica Scott’s Nebula Zephyr to journeying back to Luda where Grim is King, for stories that will take you out of this world! Join New York Times, USA TODAY, and Award-winning authors S.E. Smith, M.K. Eidem, Susan Grant, Michelle Howard, Cara Bristol, Veronica Scott, Pauline Baird Jones, Laurie A. Green, Sabine Priestley, Jessica E. Subject, Carol Van Natta, and Alexis Glynn Latner as they share stories and help out Hero-Dogs.org, a charity that supports our veterans!

10% of the first month’s profits go to Hero-Dogs.org. Hero Dogs raises and trains service dogs and places them free of charge with US Veterans to improve quality of life and restore independence.

Buy link for all stores: https://books2read.com/u/3L9aYM

I loved Pets in Space #1 and have been looking forward to #2.  I started this one with Susan Grant's story about Puppy, The Prince, The Pilot, and the Puppy.  Puppy was just a short cameo in her story where Bang-Bang got a human.  There was a promise that Puppy would also find a home and spark a romance.  I loved how he brought his two humans together.  After that I went for the stories set in worlds I had already been following.

Next was Veronica Scott's Star Cruise: Songbird where I met some old friends and found some new ones.   This fit right into the series and I loved that the pet was a bird, a very interesting bird.

Then on to read Carol Van Natta's Pet Trade set in the Minder Universe.  This one was filled with pets and two wounded characters.  I love what has been created and really enjoyed meeting the pets and the characters.

After that I read Cara Bristol's Rescued by the Cyborg, another of the worlds and authors that are a must buy for me.  This time there is a kitten who helps bring two people together.  Cara sent me a description to her story, an excerpt,and something about Cara,  all included below.

Before you start reading below I have to say there is so much more included in Pets in Space 2.  I have just mentioned the first four stories.  Each  story is a novella not a short story so I have not gotten to all the rest.  There are other stories by authors I have read and several stories by new to me authors.   There are great stories with interesting settings and a must read for Science Fiction Romance readers.

Hostage and sole survivor Solia waits for death at the hands of vicious predatory aliens when Cy-Ops agent Guy Roarke disobeys orders and charges in. A former medic, he initiates emergency medical procedures before rushing her to Cybermed.

Guy is taken with Solia, but the guilt of a past mistake won’t allow him to plan for a future with the delicate, brave beauty. Life is so uncertain, he can’t even keep Mittzi, the kitten his niece gave him. What he can do is see to it Solia gets the help she needs for a full recovery. But when best intentions place her in greater danger, it’s up to a little kitten to make everything all right again.

Guy pushed into his cabin. Next to his bags was the gift—a box tied with a big red bow. The carton was moving. And mewing. “Oh, Jessamine, what did you do?”
The box bumped into his foot. Atop the lid his niece had written: LIVE ANAMUL. OPEN IMED IMID SOON!
He ripped off the bow and peeled back the top. Inside, an angry, frightened kitten hissed. Jessamine’s cat had birthed a litter, and he recognized this baby by its gray coat, four white feet, and a blotch shaped like a star on its button nose.
Sighing, he reached into the carton.
The kitten growled and swiped its claws across his skin.
“Ow!” Guy yanked his hand back. The kitten leaped out and dove under the berth.
Great. Just great. How could his niece have done such a thing? She shouldn’t have boxed up a live animal—even if she did punch air holes in the carton. If she hadn’t contacted him and insisted he open the present, the kitten might have remained inside for quite a while.
In the corner of the container, he spotted a slip of paper, partially shredded. He unfolded it.
Dear Uncle Guy,
I know you are sad, and I want you to be happy. I am giving you one of Fluffy’s kittens so you won’t be lonely. I named her Mittzi becuz she has four wite white mittens. Pleez come home again, soon.
Jessamine
XOXO
His sister worried about him, but Carter, too, and now Jessamine? He hadn’t hidden his feelings well enough if his seven-year-old niece could pick up on them.
His fiancée’s defection had devastated him.

Thank you so much for hosting and for the review. Glad you enjoyed Pets in Space.

I'm so happy you enjoyed my very first rock star romance :) Thanks for mentioning us!

Thank you so much! Glad you are enjoying the collection!

We appreciate your support of PETS IN SPACE, and I'm glad you're enjoying the stories so far (including mine). Thanks!

Thanks for hosting us and so glad you're enjoying the stories! Thanks, also, for helping us support Hero Dogs.