Jane Austen Lied to Me
by Jeanette Watts


Be Sure to Read Where Jeanette Finds Inspiration

What college girl doesn’t dream of meeting Mr. Darcy? Lizzie was certainly no exception. But when Darcy Fitzwilliam comes into her life, he turns out to be every bit as aggravating as Elizabeth Bennett’s Fitzwilliam Darcy. So what’s a modern girl to do?

Jeanette Watts’ satire pokes loving fun at Jane and all of us who worship the characters who shall forever be our romantic ideals.

Well!  That was interesting.  My roommate invited me along to this frat party she was going to.  She went through something called rush week, and she is now pledged to a sorority.  She said the frats are less formal than the sororities, and even though I wasn’t a pledge I could go with her.  I figured, why not, it should be fun, right?

I got to meet the guy she’s chasing.  I couldn’t blame her for being interested.  He’s cute, and sweet, and considerate, and a total people-pleaser.  One of his parents must be the demanding sort who is never happy.

He introduced us to his friend… whose name is Darcy Fitzwilliam!  I wasn’t sure at first that the guy wasn’t just pulling our legs.

“Obviously,” he answered.  Not much to go by.

“I love Pride and Prejudice,” I continued.

“I hate Pride and Prejudice.” I can only describe the look he was giving me as hostile.

“I think you will find yourself very much in a minority,” I answered, returning his look with one of my own.

We didn’t talk any more that night.  Talk about getting off on the wrong foot!

Locations Where I Find Inspiration

Inspiration, for me at least, is closely linked to play.

I play a lot. I am a dance instructor, so one could say that playing is what I do for a living. I adore what I do. One could say I am teaching lead-follow skills, or foxtrot rhythms. I prefer to say I get to play with college kids, and senior citizens in my classes.

I am also a Vintage dancer. Vintage dancers don’t just waltz, or polka, or cha-cha. We get dressed up in 1860s ballgowns and waltz and polka to period tunes while dancing at the State House. Or in a mansion in Newport, Rhode Island. The cha-cha will be done while wearing a slinky 1930s dress and those incredibly cute shoes they had in that era, dancing to a 15-piece orchestra in a 1930s-era ballroom at the top of an old hotel. So, while I’m dancing, which is a playful activity, I’m also playing dress-up.

So inside my head is a very happy 8-year child.

My playgrounds being rather filled with spectacle, they are a constant source of creativity. I have danced in Mrs. Astor’s ballroom in Newport - so when I was writing Brains and Beauty, Lina Astor sort of insisted she be included in my story. When I wrote the first book, I had no idea that my heroine was friends with her. Being an avid costumer makes it very easy to depict the passage of time by discussing changing fashions. The opening chapters of Wealth and Privilege describe a German: these were dance party games that were very popular in the 1870s. The Commonwealth Vintage Dancers in Boston frequently include Germans in their balls. I’ve done the dances I am describing. I actually had a dancer proofreading my book, and she was able to recognize a set dance that my characters were doing out on the lawn on a pleasant summer night!

Jane Austen Lied to Me was inspired by another playground; the Jane Austen Festival. In this case I’d spent the weekend romping in Regency dresses at balls, and tea, and shopping, and all the participants joined in a big promenade being taped, trying to set a record for biggest parade of people in Regency costume. Jane devotees in Bath, England have surely broken that record by now, but it was fun! And then on the drive home, this story emerged. And it’s not over yet; I wasn’t even done editing the book when a different playground gave me further inspiration: while I was watching a production at the theatre I realized this book really, really wants to be a Broadway musical! 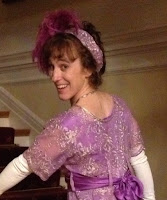 Jeanette Watts had been writing historic fiction when the inspiration for Jane Austen Lied to Me hit her on the drive home from the Jane Austen Festival. The idea was simply irresistible, and she put aside other writing projects in order to focus on writing a satire, thinking it would be a "mental vacation." It turned out to take every bit as much research to write a modern story as it does to write a historical one.

She has written television commercials, marketing newspapers, stage melodramas, four screenplays, three novels, and a textbook on waltzing.  When she isn’t writing, she teaches social ballroom dances, refinishes various parts of her house, and sews historical costumes and dance costumes for her Cancan troupe.

Jeanette Watts will be awarding a doll dressed in Regency clothing, handcrafted by the author (International Giveaway) to a randomly drawn winner via rafflecopter during the tour.

Be Sure to Visit the Other Blogs on the Tour:

Great to have you here today. Love your doll

Thank you for hosting today