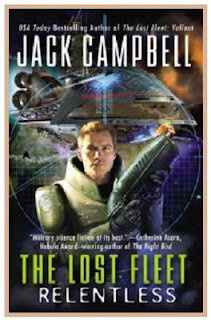 The fleet lead by Captain John Geary is within 3 jumps of Alliance space. The action starts with a stop to free Alliance prisoners of war. Geary has destroyed much of the Syndics fleet but finds that there is a large reserve flotilla that has been moved to block his way. There are still people in the Alliance fleet that do not like Geary and are trying to destroy him. All of this adds up to continued action and adventure. Jack Campbell keeps this series moving at a fast pace.

ACE published The Lost Fleet: Relentless by Jack Campbell in 2009.

The previous books in this series are:

The Lost Fleet: Victorious comes out in 2010

John Hemry writes the Lost Fleet books using the name Jack Campbell. The Starks War series and the JAG in Space series were written using John Hemry. Both are available as an eBook package or as individual eBooks from Baen. I have read both. If you like The Lost Fleet check out his other two series.
Posted by JC Jones at 7:41 AM