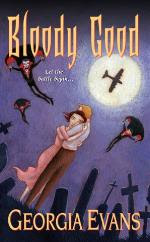 Bloody Good is a new take on vampires. Like dragons, pixies and shape changers vampires are one of the Others who still live among normal humans. The time is World War II, the place is a small village outside of London, and the characters are a mix of Others and normal humans. The German’s have dropped vampires in the area with the goal of helping the German invasion of England. Things don’t go as planned thanks to the mix of Othersand humans already living in the area. They do whatever it takes to protect home and country.

With a great cast of characters and good world building Bloody Good is a enjoyable story. Georgia Evans takes the time to develop both the characters and the differences between our world and the alternate history world in Bloody Good. The pacing is not rushed allowing the reader to savor the story. The details also set the scene for the next books in the series. Currently there are two additional books;,Bloody Awful and Bloody Right.