The Devil of Jedburgh by Claire Robyns 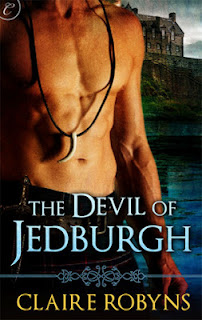 The only thing worse than being hand-fasted to the Devil of Jedburgh was falling in love with him.

Raised on rumors of The Devil of Jedburgh, Breghan McAllen doesn't want an arranged marriage to the beast. The arrogant border laird is not the romantic, sophisticated husband Breghan dreams of—despite the heat he stirs within her.

In need of an heir, Arran has finally agreed to take a wife, but when he sees Breghan's fragile beauty, he's furious. He will not risk the life of another maiden by getting her with child. Lust prompts him to offer a compromise: necessary precautions, and hand-fasting for a year and a day, after which Breghan will be free.

For a chance to control her own future, Breghan makes a deal with the Devil. Passion quickly turns to love, but Arran still has no intention of keeping the lass, or making her a mother. He loves her too much to lose her. But when a treasonous plot threatens queen and country, Breghan has to prove only she is woman enough to stand by his side.

The Devil of Jedburgh was just OK.  I liked the characters, especially Breghan.  She was a strong woman who knew what she wanted and went for it.  Arran was an alpha male but I found him to be a little too unyielding in his opinions and attitudes.  The story had familiar elements and Claire Robyns did her research before including historical elements.  If I had a problem with the story it was with historical political elements.  The elements were correct but they seemed to be inserted without any build up and only included to provide an element of danger to Arran.  I would have liked to see them part of the story from the first.  In a romance it is not the destination but the journey and I found the journey to be a little uneven.  Even so, all in all it was an entertaining historical romance.

Carina Press published The Devil of Jedburgh by Claire Robyns in 2012.

I got The Devil of Jedburgh as an eARC from Net Galley.
Posted by JC Jones at 3:30 AM