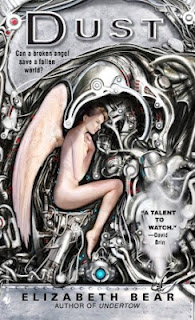 Dust has been in my electronic TBR pile since I purchased my first eReader 5 years ago.  I loved the premise:  A broken generation ship, a star about to go nova, and two women who unite to save the day.  Sounded like something I would love to read but when I started the book I did not get past the first few pages and never picked it up again.  Then several weeks ago I was at the library looking for a new audio book and saw Dust.  I will often listen to a book I would not read so I checked it out.  I am glad I listened but I would never have finished the book in print form.
Dust is not like any other book about a generation ship.  Nothing on the ship is as I expected.  The story is more about love and hate, reaction to change, and the personalities of the people and the AI’s on the ship than it is about getting the ship to move.  The prose is beautiful but often introspective.  The characters are often confused and as a result the action is confusing.  There are frequent changes in point of view adding to the confusion.  Having said all of that Dust is book one of a three part trilogy and if I could find Chill and Grail in audio book form I would finish the trilogy.
Here is what Goodreads has to say about Dust:
On a broken ship orbiting a doomed sun, dwellers have grown complacent with their aging metal world. But when a serving girl frees a captive noblewoman, the old order is about to change....

Ariane, Princess of the House of Rule, was known to be fiercely cold-blooded. But severing an angel’s wings on the battlefield—even after she had surrendered—proved her completely without honor. Captive, the angel Perceval waits for Ariane not only to finish her off—but to devour her very memories and mind. Surely her gruesome death will cause war between the houses—exactly as Ariane desires. But Ariane’s plan may yet be opposed, for Perceval at once recognizes the young servant charged with her care.

Rien is the lost child: her sister. Soon they will escape, hoping to stop the impending war and save both their houses. But it is a perilous journey through the crumbling hulk of a dying ship, and they do not pass unnoticed. Because at the hub of their turning world waits Jacob Dust, all that remains of God, following the vapor wisp of the angel. And he knows they will meet very soon.
Recorded Book published Dust by Elizabeth Bear in 2007.
Dust was narrated by Alma Cuervo.
Posted by JC Jones at 4:40 AM

Sounds like a good book, very interesting. I am a new follower. Great blogsite! What a cute cat.

Thanks for stopping by. My cats love being complimented.