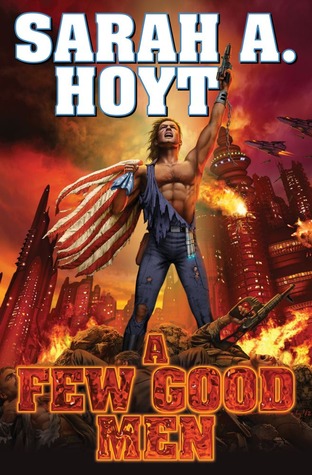 
Original trade paperback, sequel to Darkship Renegades and Darkship Thieves. The son of a ruler on Earth instigates civil war and revolution when he attempts to take the place of his assassinated father and uncovers a terrible secret that has been used to enslave humanity.
The Son Also Rises
On a near future Earth, Good Man does not mean good at all. Instead, the term signifies a member of the ruling class, and what it takes to become a good man and to hold onto power is downright evil. Now a conspiracy hundreds of years in the making is about to be brought to light when the imprisoned son of the Good Man of Olympic Seacity escapes from his solitary confinement cell and returns to find his father assassinated.
But when Luce Keeva attempts to take hold of the reins of power, he finds that not all is as it seems, that a plot for his own imminent murder is afoot and that a worldwide conflagration looms.  It is a war of revolution, and a shadowy group known as the Sons of Liberty may prove to be Luces only ally in a fight to throw off an evil from the past that has enslaved humanity for generations."


While this says it is a sequel to Darkship Renegades and Darkship Thieves the action does not happen after the first two books,   Most of the action is happening at the same time but on Earth instead of in space.  There are several places where the characters and action from both are together but the author assumes you  have read Darkship Thieves and does not repeat what happened in the other book.  As a result you could be very confused.
Luce Keeva tells A Few Good Men in the first person.  He has been in prison for 14 years and escapes where there is a prison break.  He goes home to find all of his family dead.  When he tries to take his Father’s place some long held secrets are revealed.  As a result he joins in with others to bring about change.  His story is the story of the revolution that follows.  Because it is what one man remembers there are large sections of the book that just present information and there is action only where Luce is present.


Books where you spend a large amount of time in a characters head are not my favorites.  I prefer getting information through dialog and action and there was just not enough of that in A Few Good Men to satisfy me.   As a result it took me a long time to read the book.  I would read a little and then put it down, as it just was not holding my attention.  I did finish because I had read the first two books and kept going back to see if it wouldn’t get better.


This would stand along but there are sections where the actions from the other books intersect.  Where that happens some things just would not make sense if you only read this one book.  I am glad I finished the book but it is far from one of my favorites.