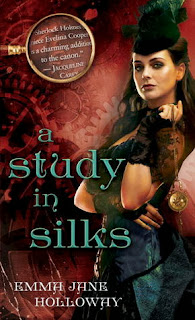 "Evelina Cooper, niece of Sherlock Holmes, is ready for her first London Season - except for a murderer, missing automatons, a sorcerer, and a talking mouse. In a Victorian era ruled by a ruthless steam baron council, mechanical power is the real monarch, and sorcery the demon enemy of the empire. Evelina has secretly mastered a coveted weapon - magic that can run machines. Should she trust the handsome, clever rake who speeds her breath, or the dashing trick rider who would dare anything she would ask."

World Building:  There are two worlds created here.  There is the very public world of steam and the powerful men who control it.  There is the forbidden world of magic.  Both are important to the story.  The world building is very complex.  Explaining this world in the context of the story requires a long book.  Don’t try to skim or you will miss some very important facts about the world of A Study in Silks.

Back Story:  While this is a steampunk/ paranormal world this is also the world of Sherlock Homes and his story as told by Author Conan Doyle is important in A Study in Silks.  Of course each of the characters come with their own back-story and that is woven into the dialog and action.

Plot:  Very complicated.  It starts with murder and moves from there.  Solving the murder leads to further problem.  Don’t look for a clean ending to the book.  This is a set up for the rest of the series and leaves a lot hanging.

Characters:  Evelina Cooper is the main character.  She is very well developed, as are the other main characters.  Nick, who comes from Evelina’s past, and Tobias, who is part of her present, are interesting but are developed in a way that makes a great contrast. The book is filled with great side characters that play an important part in the story.

Writing:  It is difficult to take a character developed by someone else and make him part of a new story. By placing Sherlock Homes in a different world and making him a side characters Emma Jane Holloway has managed to overcome that difficulty.  A Study is Silks is a complex well-written story that held my attention and left me ready to read book two, A Study in Darkness.

It will be interesting to see how the many loose threads are resolved in future books.  A Study in Silks lays a great foundation and provides a good platform for future stories.

Del Ray published A Study in Silks by Emma Jane Holloway in 2013.

I received an ARC of A Study in Silks from Netgalley.
Posted by JC Jones at 12:30 AM