The Misfortune Cookie (An Esther Diamond Novel) by Laura Resnick 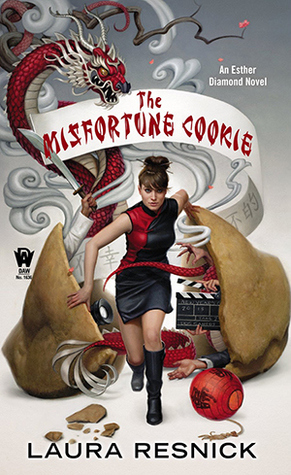 What Goodreads Says:
Esther Diamond's year gets off to a rocky start when NYPD's Detective Connor Lopez, who slept with her and then didn't call, shuts down her current place of employment and gets her arrested. Once she's out of handcuffs, and with no paying work on the frigid horizon, Esther takes a small role in a grad student's film project in Chinatown—where her friend semi-retired hit man Lucky Battistuzzi, who escaped Lopez's sweep at the Little Italy restaurant where Esther works between acting jobs, is hiding out in a Chinese-Italian mortuary.
Esther and Lucky soon realize that something strange is going on in Chinatown, where beautifully handcrafted fortune cookies are inflicting deadly mystical curses on the hapless victims who receive them as gifts—and before long, Esther learns that Detective Lopez is one of the recipients. As preparations for Chinese New Year heat up in the ice-covered neighborhood, when the streets will be filled with costumed lion dancers, firecrackers, and dense crowds, Esther and Lucky summon the help of their friend Max, a semi-immortal mage and semi-solvent bookseller, to help them save Chinatown and Lopez (with whom Esther is not on speaking terms) from a mystical murderer of maniacal menace.
OK, this is book # 6 for Esther and Conner and they still are not together.  Book 5 finished with it looking like they were finally getting together and then Conner failed to call as promised.  That failure is the basis for much of the interaction between the two in The Misfortune Cookie.
There was not as much of the paranormal is this book.  Someone is putting a death curse in fancy fortune cookies.  That is almost a side story to what is going on between Esther and Connor.  Esther is really unforgiving and poor Connor is really clueless.  As angry as I was with him at the end of book 5 I started to feel sorry for him in book 6.
The cursed fortune cookies do play a big part in the end.  Esther does not have a paranormal bone in her body but does believe in the paranormal powers.  Connor does not believe in anything like the paranormal but does have paranormal powers that appear when he is under stress.  When Connor gets a cursed fortune cookie and Esther saves him for the curse it causes problems between the two so look to see what will happen in book 7.  I will have it on pre-order just like I had The Misfortune Cookie.
The story is set in Chinatown in New York and there is a lot of the history of Chinese in America and Chinatown worked into the story.  At time it is like a history text.   Laura did a lot of research for the book and wants to share what she learned.  The Misfortune Cookie is not as fast paced as previous books but it is a good addition to the Esther Diamond series.  This is a fun series that should be read in order.  If you start with The Misfortune Cookie some back-story is worked in but starting from the beginning is much better.
Daw published The Misfortune Cookie by Laura Resnick in 2013.
Posted by JC Jones at 6:13 PM