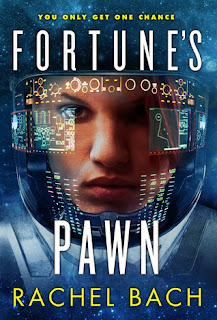 Devi Morris isn't your average mercenary. She has plans. Big ones. And a ton of ambition. It's a combination that's going to get her killed one day - but not just yet.

That is, until she just gets a job on a tiny trade ship with a nasty reputation for surprises. The Glorious Fool isn't misnamed: it likes to get into trouble, so much so that one year of security work under its captain is equal to five years everywhere else. With odds like that, Devi knows she's found the perfect way to get the jump on the next part of her Plan. But the Fool doesn't give up its secrets without a fight, and one year on this ship might be more than even Devi can handle.

Fortune’s Pawn is the second book from Orbit that I have read recently.  Ancillary Justice was the first.  Both are Science Fiction and both tell really great stories but the way each author’s tells their story is very different. In Ancillary Justice the main character is the secret and drives the story.  In Fortune’s Pawn there is a secret being kept from the main character and that drives the story.  What they have in common is that both are really good Science Fiction.

Setting:  The book is set on the trade ship Glorious Fool.  The word around the spaceport is that the ship is cursed.

The World Building:  There are two human powers (Earth and Paradox) and four alien races that make up this world.  All of this is very well defined.

Characters:  Devi Morris is the strong female lead in the story.  She is driven and that drive is what brings her into danger.  Rupert, the ship’s cook, is part of the big secret.  He is almost too good to be true.  Then there are the other characters on the Glorious Fool.  They bring additional tension and some humor to the story.

Plot:  That one is hard to come by.  The Fool has a mission that Devi does not understand.  There is another group that is trying to stop whatever the Fool’s crew is doing.  There are a lot of secrets and stopping Devi from discovering what they are seems to drive the plot.  Look for many twists and turns and even then some of the secrets will not be reveled.

Writing:  The writing is good.  Rachel Bach does a good job moving the story along.  All of the characters are well drawn and each has an important place in the story.  Fortune’s Pawn is written in the first person and in the active voice.

This is the first book in a trilogy so don’t expect anything to be solved.  In fact don’t expect to have all the facts about what is going on.  It ends with a big cliff hanger and what I call a Scarlett O’Hara ending.  Honor’s Knight, book two, will be released in February of 2014.

I received an ARC of Fortune's Pawn from Netgalley.