The Clockwork Dagger by Beth Cato 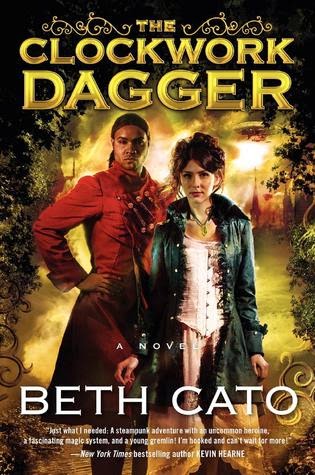 Full of magic, mystery, and romance, an enchanting steampunk fantasy debut in the bestselling vein of Trudi Canavan and Gail Carriger

“The Clockwork Dagger was just what I needed: A steampunk adventure with an uncommon heroine, a fascinating magic system, and a young gremlin! I’m hooked and can’t wait for more Octavia and Leaf!”
—New York Times bestselling author Kevin Hearne

Orphaned as a child, Octavia Leander was doomed to grow up on the streets until Miss Percival saved her and taught her to become a medician. Gifted with incredible powers, the young healer is about to embark on her first mission, visiting suffering cities in the far reaches of the war-scarred realm. But the airship on which she is traveling is plagued by a series of strange and disturbing occurrences, including murder, and Octavia herself is threatened.

Suddenly, she is caught up in a flurry of intrigue: the dashingly attractive steward may be one of the infamous Clockwork Daggers—the Queen’s spies and assassins—and her cabin-mate harbors disturbing secrets. But the danger is only beginning, for Octavia discovers that the deadly conspiracy aboard the airship may reach the crown itself.

The first thing that caught me in The Clockwork Dagger was the world building.  There is a wonderful mix of steampunk and magic in a world torn by a war between two different countries.  Beth Cato did a wonderful job of layering each element needed as the story built.   The result is fascinating and kept me reading just to see what part of the world would be revealed next.

I also loved the characters.  Octavia Leander is a very strong dedicated healer wanted by one side and targeted for death by the other.  She carries the story with the help of Leaf, a gremlin, Viola Stout. a very unusual princess, and Alonzo Garret, a Clockwork Dagger in training.

Intertwined into all of this is The Tree, the heart of Octavia’s magic and a huge betrayal. The Clockwork Dagger is a mystery and a thriller with just a touch of romance.  The story comes to a satisfying conclusion but leaves Octavia and Alonzo with a new journey ahead.  I will be waiting to see what happens to Octavia and her Clockwork Dagger in the next book.

Harper Voyager published The Clockwork Dagger by Beth Cato in 2014.

I received an ARC of The Clockwork Dagger from Edelweiss.
Posted by JC Jones at 12:30 AM