Synopsis
It is Earth year 2213—but, of course, there is no Earth anymore. Not since it was burned to a cinder by the sun, which has mysteriously begun the process of going supernova. The human race has fled to Mars, but this was only a temporary solution while we prepare for a second trip: a one-hundred-fifty-year journey to a distant star, our best guess at where we might find a new home.
Liam Saunders-Chang is one of the last humans left on Mars. The son of two scientists who have been racing against time to create technology vital to humanity’s survival, Liam, along with his friend Phoebe, will be on the very last starliner to depart before Mars, like Earth before it, is destroyed.
Or so he thinks. Because before this day is over, Liam and Phoebe will make a series of profound discoveries about the nature of time and space, and find out that the human race is just one of many in our universe locked in a desperate struggle for survival.
AMAZON | BARNES & NOBLE | BOOK DEPOSITORY
REVIEW:

The last day on Mars starts with Liam and two friends leaving their class to have one last adventure.  What should have been a fun adventure turns out to be anything but.  It is the start of something unexpected that brings danger and the threat of death to the remaining few humans that are left on Mars.  That danger follows Liam into space.  This is a great set up for a series.  The plot is full of unexpected twists and turns.  Look for the first mention of Phase One and see if you can figure out what it was.  There is no resolution to the problems humans leaving the Solar System are having.  There are hints but nothing is spelled out.  You must use se your imagination until book two comes out.

Praise for LAST DAY ON MARS
“Emerson’s writing explodes off the page in this irresistible space adventure, filled with startling plot twists, diabolical aliens, and (my favorite!) courageous young heroes faced with an impossible task.” --Lisa McMann, New York Times bestselling author of The Unwanteds series
“Last Day on Mars is thrillingly ambitious and imaginative, a rousing space opera for any age, meticulously researched and relentlessly paced. A fantastic start to an epic new series.” --Soman Chainani, New York Times bestselling author of The School for Good and Evil
“This is perfect science fiction: a terrifying yet very cool vision of the future, lots of technological awesomeness, mind-bending alien mysteries, a mission to save the human race—and two funny, resourceful, very real kid heroes who I’d follow to the edges of the universe.” --Tui Sutherland, New York Times bestselling author of the Wings of Fire series
“A hugely enjoyable blend of adventure, humor, science, and kids trying to find their place when humanity itself doesn’t have one.” --Emma Trevayne, author of The Accidental Afterlife of Thomas Marsden
“Action-packed science-fiction adventure.” --Brightly.com

ABOUT THE AUTHOR
Author of the EXILE series, THE ATLANTEANS series, THE FELLOWSHIP FOR ALIEN DETECTION, the OLIVER NOCTURNE series and CARLOS IS GONNA GET IT. Musician in THE BOARD OF EDUCATION. Former K-8 science teacher, currently teaching with Richard Hugo House and Writers in the Schools. Originally from Cheshire, CT, now living in Seattle, by way of Boston.
WEBSITE: http://www.kevinemers on.net/TWITTER: @kcemersonGOODREADS: https://www.goodrea ds.com/author/show/1164105. Kevin_Emerson
FACEBOOK: https://www.facebook .com/kevinemersonauthor/
INSTAGRAM: https://www.instagr am.com/kcemerson/ 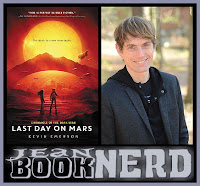 --Giveaway is open to International. | Must be 13+ to Enter
- 7 Copies of Last Day on Mars (Chronicle of the Dark Star #1) by Kevin Emerson

I found the book very interesting. Wonder when the next book will be out?