Run to Her by Lynn Kellan - Guest Post and Giveaway

Today I have Lynn Kellan the author of Run to Her here as my guest.  She is going to share how she handles negative criticism.  It is great to have you here today Lynn.

How to handle negative criticism by Lynn Kellan

One sharp word can shatter someone’s aspirations. Unfortunately, the anonymity of social media makes it easy to unleash a verbal arrow. People can launch into tirades about anyone, any team, or any book. Those angry posts generate a ton of “likes” and “shares.” Venom is rewarded, not shamed. No one seems to think about the effect of their words because they cannot see the flinch of pain those words produce. Whenever I see this type of negative criticism about the things I care about, I try to ignore these hurtful words.

But when negative criticism comes from someone I know and value, I pay close attention. Often, that criticism is correct. I don’t want to hear it, I don’t want to face the difficult task of fixing the problem, but I force myself to take a deep breath and listen. I ask questions. I try to understand why, and every time I gather the courage to face my deficiencies, I learn from them.

Growth is painful. When we’re kids, our bones ache with every inch we add to our frame. Our teeth bleed every time an adult tooth forces a baby tooth out of our mouths. Our souls ache when we disappoint or anger our parents.

Growth is no different when we’re adults. It hurts like heck, only we can ignore it if we want. We don’t always have to face negative criticism. We can pretend we didn’t hear it. We can say the criticism comes from someone who doesn’t know what they’re talking about. We can trick ourselves into believing that we’ve got nothing left to learn.

I admit that many forms of negative criticism are poorly worded. Those verbal barbs hurt so much, we struggle to see past the pain in order to get a glimpse of the truth. I’m guilty of this all the time. When a critique partner tells me that a portion of my work needs editing, I don’t want to listen. But I’ve learned that every time I take a second look at the criticism, every time I try to fix the problem, my work improves.

In a strange way, criticism is a gift…if you’re willing to unwrap the ugly package.

Gabriel Antonov is a mechanic who can fix anything, even a woman’s hesitance. His talents have earned him the well-deserved reputation as a player, but when a routine one-night stand goes wrong, he’s haunted by what he’s done. Nothing can free him from those depraved memories, until he meets Leigh Nelson.

Leigh avoids strong, silent types like Gabe, who is stronger and quieter than most guys. The only man she’s focused on is her father, who is suffering from a devastating health crisis. She’ll do anything to help him, even at the cost of ignoring her own well-being, but the stress is getting to her. Gabe’s strength is tough to resist, and his silence might be hiding a crushing secret only she can understand.

He can’t outrun his gut-deep craving for her. Problem is, she’s running from him. When they’re marooned in his lakeside cabin, he might finally catch her…if he can admit why he’s falling apart without her.
~~~~~~~~~~~~~

She rose and gave him a smile.

That smile made him want to do pointless, tender things like brush his fingers through the blonde curls hanging down her slim back, but he kept his hands to himself. With her, he had to be careful. Take things slow. If he moved too fast, she’d come up with some reason to leave. He wanted to give her reason to stay.

Or a long weekend.

Whatever it took to satisfy his hunger for her. 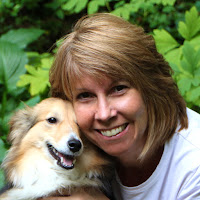 Lynn Kellan writes contemporary romance about strong men who have a weakness for smart women. She believes men and women aren't that different, because everyone wants to be with someone who will empty the dishwasher. To prepare for her career as a romance author, she fell in love with bad boys, burly athletes, battle-hardened Marines…and married a chemist. Lynn has won numerous writing contests and served two terms as President of her local Romance Writers of America chapter, but she feels a true sense of accomplishment whenever she doesn't embarrass her teenaged kids.

For love. For funny. For ever.

Visit the other blogs on the tour for additional information on Run to Her:

It's so nice to be here at Mixed Book Bag! Thanks for hosting! And I'm in awe of your adventures RVing around the country. Too cool! I live near Philadelphia, but I long to visit Wyoming again (we spent some time in Jackson Hole ten years ago, and loved it).

I'll be checking in throughout the day.

Like you post on how to handle Negative Criticism. Talking about it being an ugly package that you need to unwrap was a great way to describe. Thanks of being here. My RV days are over now but I do miss carrying my house with me as I traveled around the country.

Great post - I enjoyed reading it. Thanks for sharing :)

I haven't been to Philadelphia since I was really young, I'm curious!

I loved the excerpt! Thanks for hosting.

Hi Emily! I'm so glad you enjoyed the excerpt! And I hope you're having a wonderful weekend.

Congrats on the book. Thanks for hosting. I hope that I win. Bernie W BWallace1980(at)hotmail(d0t)com

Hi Bernie! I'm so glad you stopped by!